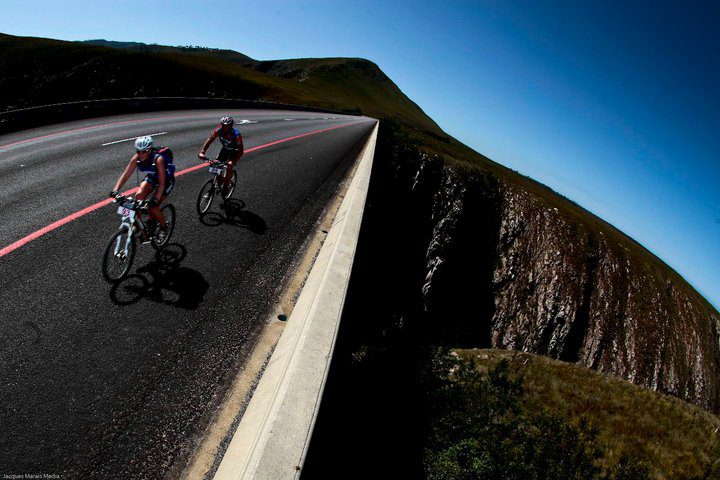 The Southern Storm Duathlon, presented by HI-TEC, unfolds over 6 incredible days along SA’s spectacular Garden Route. Endurance athletes from across the country come here to slug it out amongst each other, andalso against the elements. After running the Otter African Trail Run, they continue to mountain bike and trail run for five further days, pitting their physical skill and mental prowess against the natural obstacles of the Garden Route. 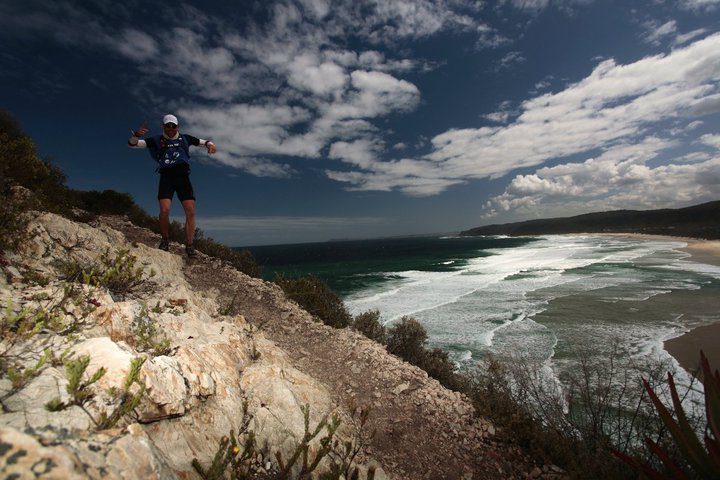 Sometimes, a single day of adventure delivers incredible memories, and today was such a day. Exactly forty eight hours ago, John Collins broke the OTTER Trail Run Record to post an unbelievable time of 4hrs 56min, and he was duly hailed as the new Otter King. Two days later, and the second installment of this legendary run sees his record well and truly demolished. Andre Gie stands up and delivers against last year’s speed man, Ian-Don Wauchope, in a guts-and glory display of hardcore running. After 42km, he hammers home in 4hrs 48min, a mere nine seconds ahead of Wauchope. Following on from this in-your-face slugfest, Jeannie ‘The Bomb’ Bomfordt exemplifies all that is sublime about running, floating in across the Groot River in an untouchable 5hrs 17min. An impeccable display from all the runners, nonetheless from those who battled home in a gruelling twelve hours. 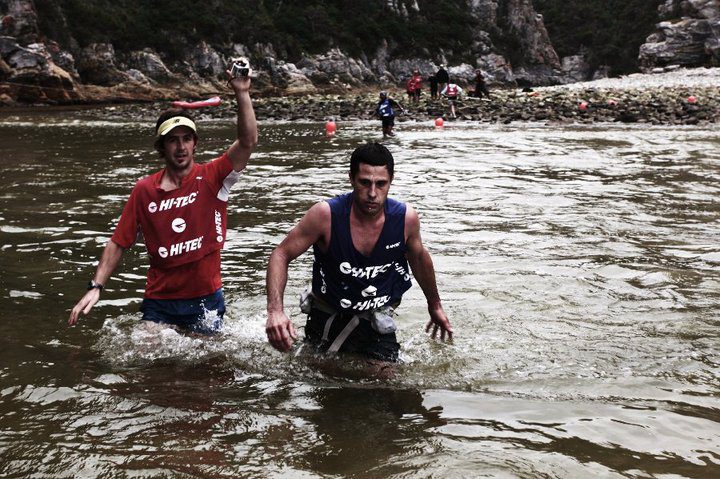 The OTTER African Trail Run, presented by global outdoor apparel manufacturer HI-TEC, was yesterday presented for only the second time within the scenic Garden Route National Park. This unique and exhilarating race, run in a single day along the 5-day Otter Hiking Route, showcases the natural splendour of one of South Africa’s favourite (and newest) national parks. Few people are afforded the privilege of doing ‘The Otter’ in one day, and it is certainly not within everyone’s physical ability to do so.

Yesterday however saw 160 athletes arrive at Storms River Mouth to do exactly this: run the Otter Trail, and do so within the maximum allowed time of 10 hours. This was to be the second running of ‘The Otter’, an event made possible only after a historic agreement was signed between organisers Magnetic South and SANparks management.

The five-day hiking trail, stretching over a distance of 42km, was last year blitzed by KZN runner Ian-Don Wauchope in 4hrs 59min, making him the first athlete to officially break the mythical five hour barrier.  This year, with the event run twice – this past Saturday as well as Monday (as part of the Southern Storm Duathlon) – 300 eager endurance runners were given the opportunity to emulate Wauchope’s ‘impossible feat’.

All sub-five hours competitors have their names engraved on the ‘Otter Grail’, a trophy especially designed for the event, and out of all the runners, the one most eager to make this a reality was John Collins. As a Knysna and Sedgefield local, he has literally grown up running wild along the Garden Route coastline.

The concept of the OTTER African Trail Run was the collective brainchild of brothers John and Mark Collins, and they are also key partners in the successful event organising company, Magnetic South, responsible for staging ‘The Otter’. Together with HI-TEC and Plettenberg Bay Tourism, they forged a partnership with SANparks, thus making the impossible dream of ‘running a 42km off-road marathon along an unspoilt wilderness coastline’ a reality.

John’s personal impossible dream was to have his name inscribed on the Otter Grail. In order to achieve this, he had to run a flawless 42km burst, negotiating plunging sea cliffs, loose rocks, cascading waves, sandy beaches, treacherous tree roots, gruelling climbs and at least three river crossings – one of them tidal and with a huge ocean swell building – and do so in less than five hours. He did exactly this, in a breathtaking time of 4hrs 56min 43sec, obliterating the existing record and fulfilling a life-long dream. He was chased all the way by Plettenberg local lad Victor Gugushe, who missed the five hour mark by an agonising 12 seconds, and Dominic Simms, who claimed third position. In the ladies category, Jacqueline Haasbroek duelled it out with Katya Sogget, the former claiming victory in the end with a new ladies record time of 5hrs 34min.

Overcast conditions, perfect for running, and superb organisation by the Magnetic South crew saw the event unfold flawlessly and without mishap. ‘A new benchmark has been set for South African trail running’, said Mickey Mallet, MD of outdoor apparel manufacturers HI-TEC. ‘We expect this event to grow immensely, not only amongst local racers, but also within the wider international running community. In my opinion, this is not only the most technical trail run in SA, but also the most beautiful’!

According to event organiser Mark Collins, the key ethos around the Otter African Trail Run focuses on environmental preservation. ‘The only way we can make this event sustainable for competitors, landowners and outdoor enthusiasts is to be untouchable when it comes to how we treat the environment. In fact, we leave the trail in a better condition than what we find it in, and this year removed more than 70 plastic dry-bags left behind by hikers who cross at Bloukrans’.

Although the inaugural ‘Otter’ is over, it makes up part of the Southern Storm Duathlon, presented by HI-TEC, and the action will continue unabated tomorrow. 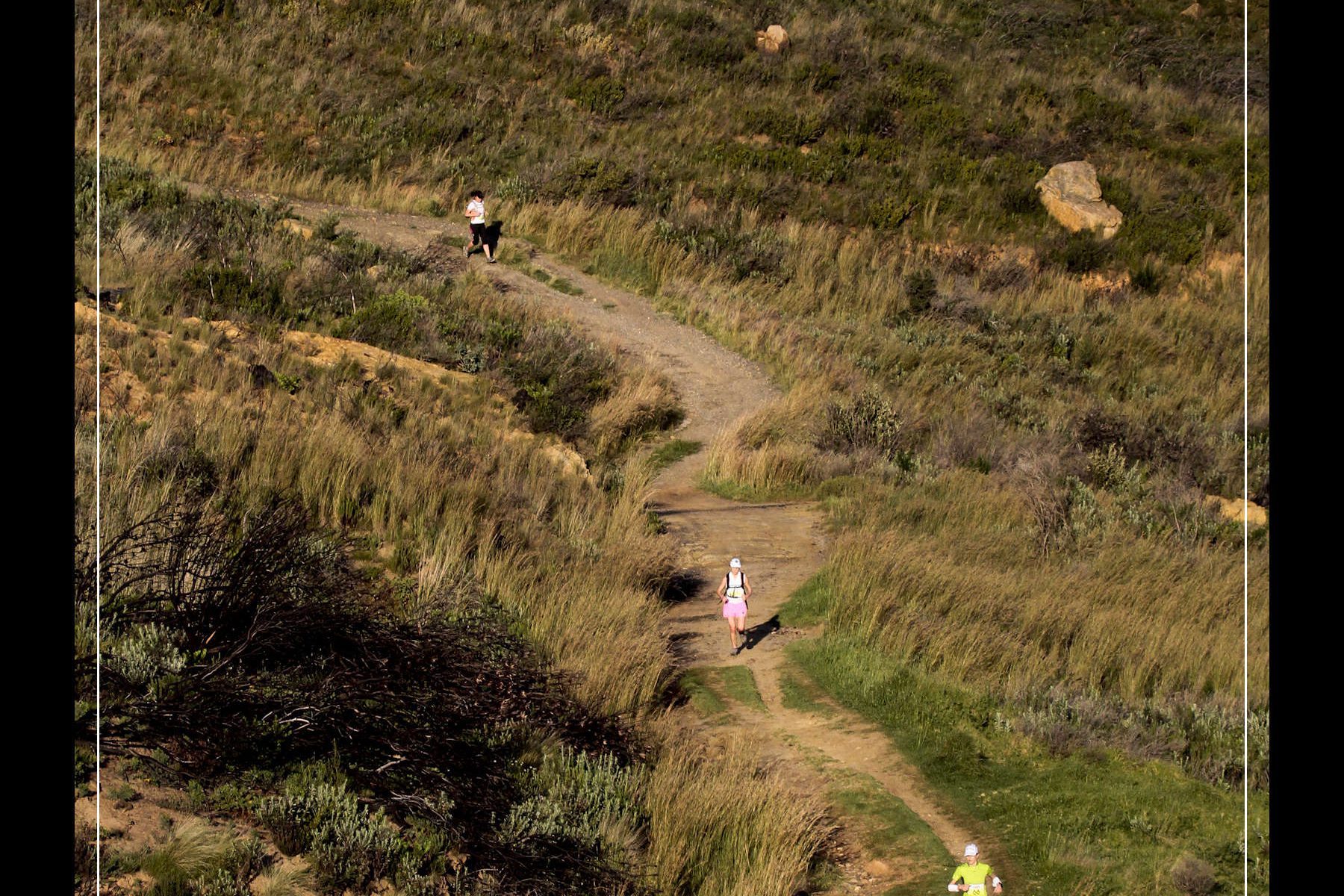 The Crazy Store Table Mountain Challenge has attained legendary status – there’s no argument about that. Any athlete who has taken on this epic scramble-ramble-run around the Mother of All Mountains will attest to that. All I can say is ‘frigging awesome!’ to each and everyone of you who completed it in such fine style again this year. 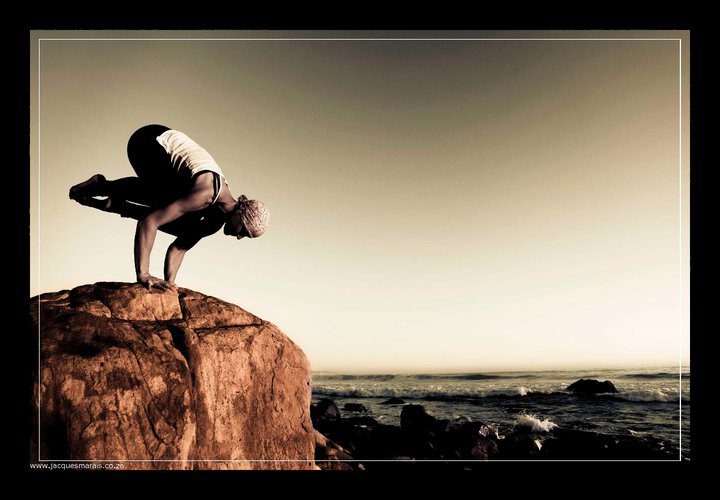 Glorious evening shoot with Karyn for her LIVE BALANCED web site and marketing material. Yoga, thai massage, body balancing, posture correction – she does it all, and she does it best. I should know – she’s my partner in running, paddling, mountain biking, surfing and, most importantly, in living life to the full Until the site is up and running, get hold of her on info@livebalanced.co.za 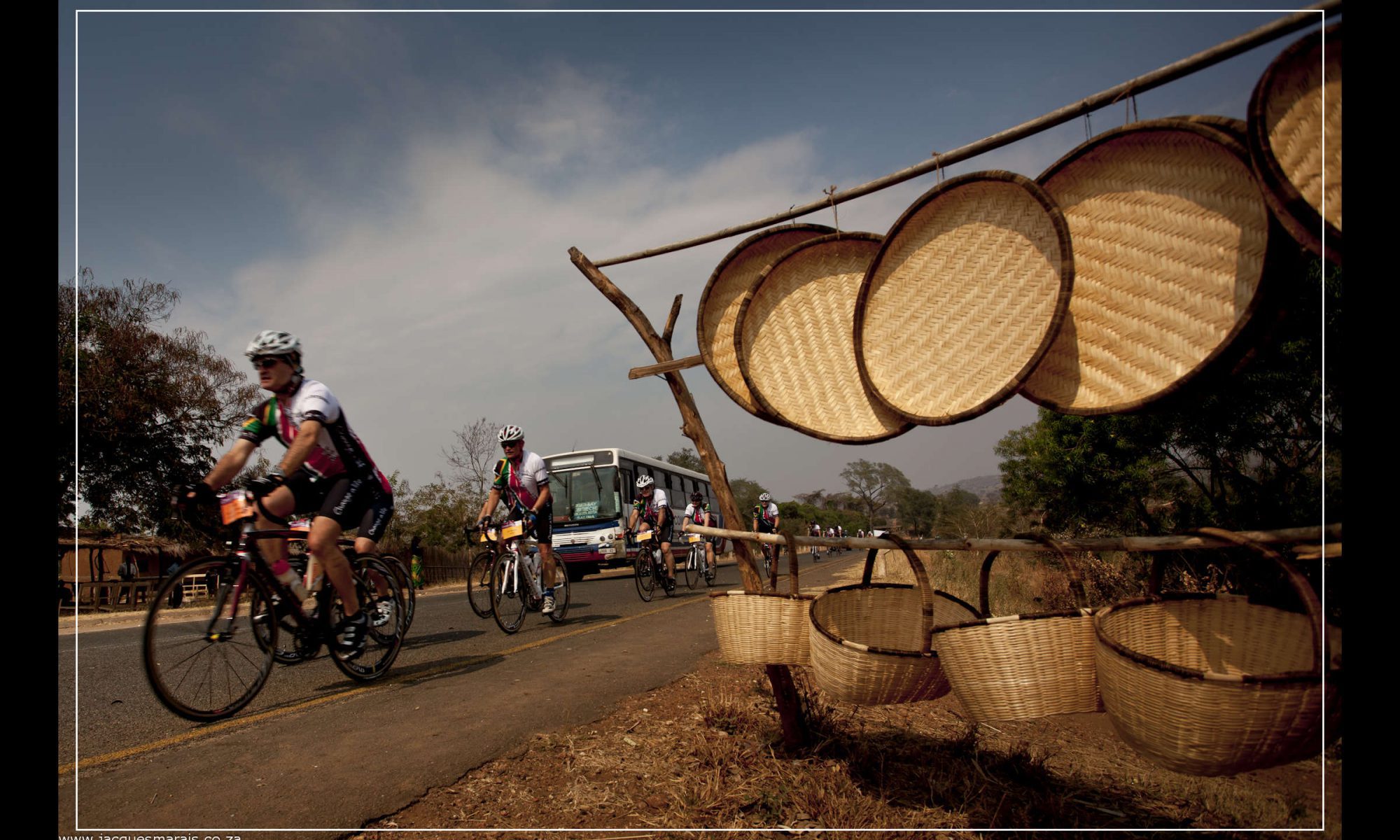 Malawi is an undeniably exquisite country, and this may be why the clash between the natural splendour and harsh reality of life thumps you in the gut like a juggernaut truck. Baobab dawns, the tranquility of a rift valley lake, and the echoes of fish eagle calls at sunset contradict with kids of 4 or 5 carrying bundles of wood as heavy as themselves, and their mothers and fathers breaking their backs to scratch a living under an unforgiving sun. And yet, and yet … every time you meet a Malawian, you are greeted with a smile as wide as the lakeshore itself. And you understand why this country will always be known as the Warm Heart of Africa. Mwulibanje – may God bless you all. 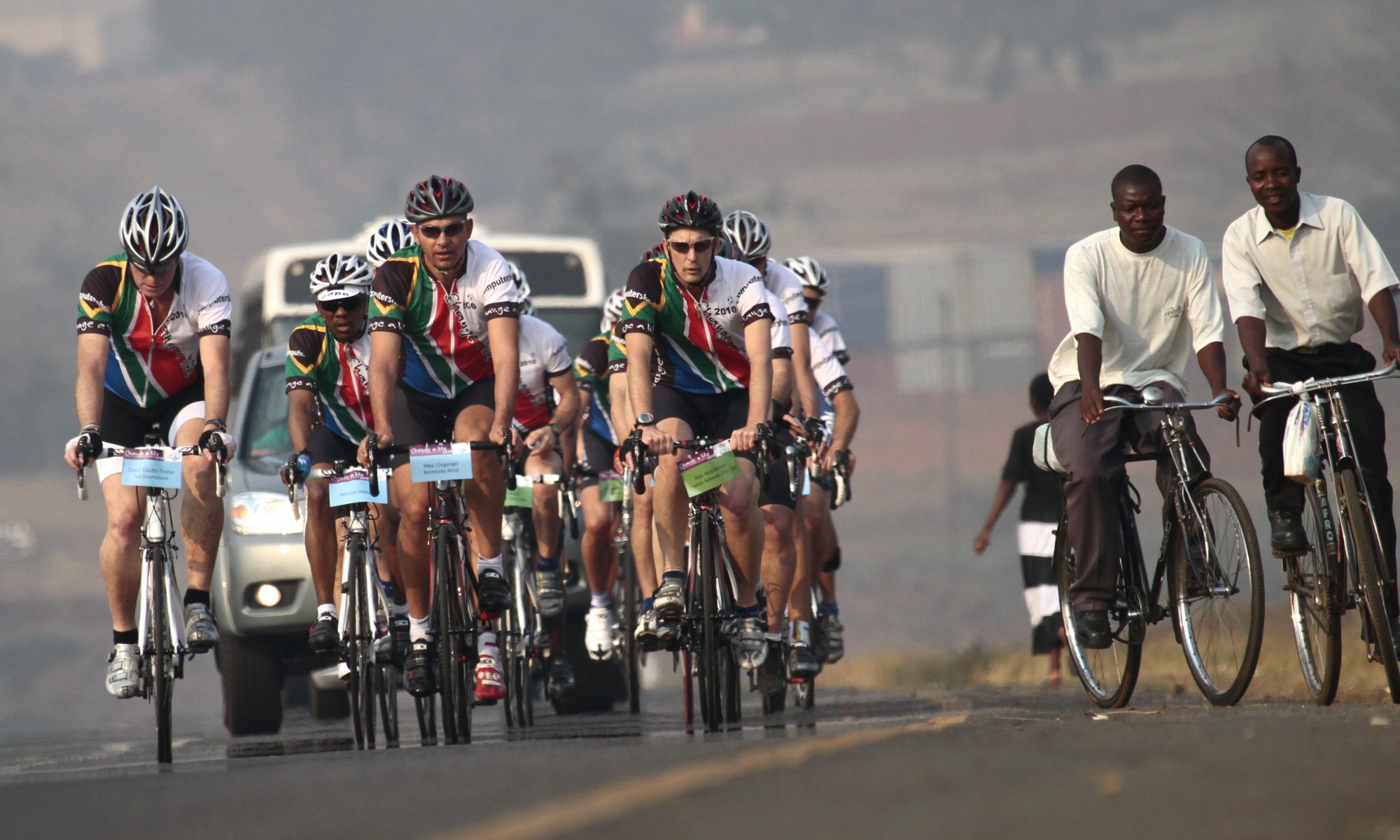 Our world is out of kilter. A top of the range Pinarello bicycle will set you back well over R100k. This is the bike most of the top executives rode during the COMPUTERSHARE ‘Change A Life’ Cycle Tour in Malawi. In Malawi, the average monthly income is R270, which means a breadwinner would need to slave away for around 37 years in order to earn the value of this leisure toy.

But this was exactly what the tour was about: Changing Lives. 64 captains of industry took part in this ride through a country know as the ‘Warm Heart of Africa’, and their financial contributions and on-going support will hopefully help to bridge the gap between those who have everything, and those who have no choice.

In my images, I have tried to capture that indelible lightness of balance between two very differing clans of the Two Wheel Tribe. And in the end, they are united by two things – the bicycle, and an underlying love for Africa. May these two worlds, in time, become one.