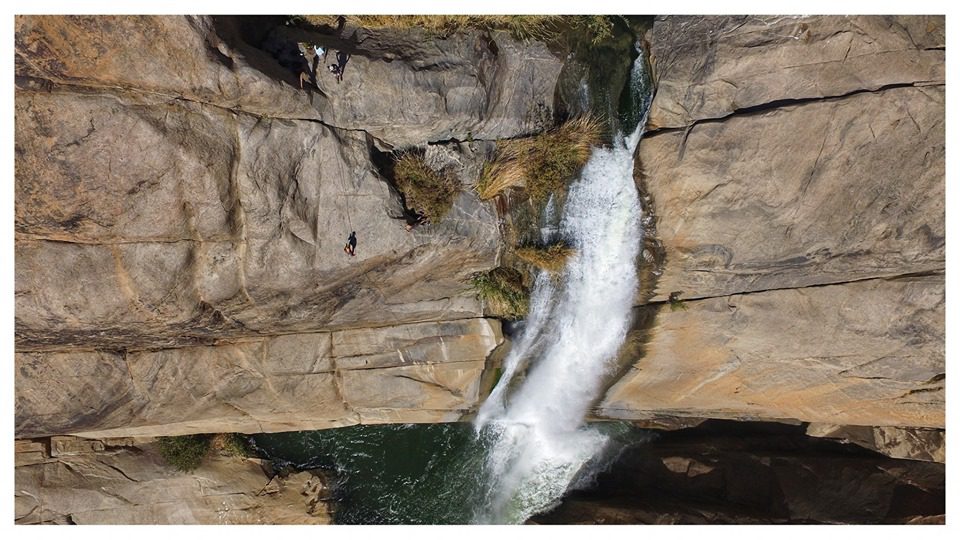 Yoh! Some days your endorphins get a serious kickstart, with the great outdoors delivering one of those gut-thumping punches right in the solar plexus. Today was one of those days.

Yesterday, the Isuzu South Africa #BeyondAukoerebis Expedition rolled into #Augrabies National Park, our 5th desert on this rollicking road trip around South Africa’s superb arid regions. The plan was always to find an epic #abseilinto the Orange River gorge, and there can truly be no grander setting than #TwinFalls, one of the lesser known icons in this premier natural playground.

Peter Van Kets set up an unparalleled abseil point after a hectic scramble into the cliff top, and then it was time to man up. The swirling pool at the base of the falls seriously played on my nerves, and as the first man on the rope I was properly kakking myself. The rock-solid face made for an easy rappel, but with the rope being suctioned into the impact whirlpool, there were a few nervous moments as I hit the icy water.

PVK had joined me on a narrow ledge about 15m up, and he soon plunged into the jade pool, too. This was by no means the end of our adrenaline trip, as a sketchy scramble up a gritty line – sans a safety rope – loomed (literally). At one stage, we chimneyed into a dead end and had to unpack some loose rocks to squeeze through the final rabbit hole, before finally summitting on top of this rocked up world.

Certainly not an adventure I’ll forget in a hurry … These are a few quick edits on the Sony Mobile ZA #Xperia10Plus – loads more to follow. Huge thanks to Danie van Zyl from Khamkirri for his expertise (and kiffness, of course). We hope to hook up with them tomorrow for some fly-fishing and a proper kuier.