Beyond the Rift Valley 2018 – Unpredictable Africa 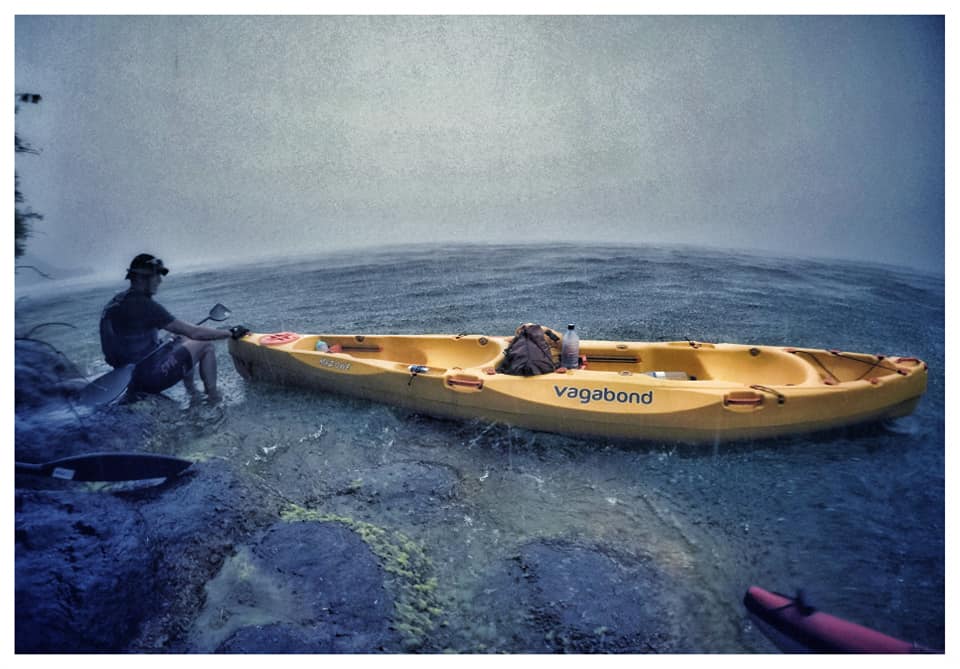 Unpredictable. That’s Africa for you. The past 3 days saw us paddling the aqua paradise that is #LakeKivu, another of #Rwanda‘s superlative tourism gems. This 480m deep lake – just on 150km in length – could easily rival the rugged beauty of Corsica, with steep volcanic ridges rising from tranquil, indigo blue waters.

On most days, the surface shimmers like liquid glass, with gentle afternoon breezes only occasionally feathering the waters of hundreds of hidden bays. Our @dunloptyres #BeyondTheRiftValley followed the lake shore from south to north while @PetervanKets #mountainbiked the #NileCongoTrail, with only a rare glimpse now and then of Kivu in a more taciturn mood.

Our #kayak leg would take us in the opposite direction, from #Rubavu and down towards Cyangugu over 3x days. It started with a beaut of a blade on Day 1, with the #vagabondkayak Mazowe gliding effortlessly past dozens of small islands as we approached our first wild camping spot. The #DunloptyresSA clients joined us here, and many tall tales were shared in the dancing light of a fire flickering amidst swaying island trees.

An early start saw us then head towards the town of Kirongo on Day 2, but with a stop at the ‘Island of the Giant-Testicled Fruit Bats’. Pistol and I got there first, and quickly missioned to the highest peak to grab drone-angle photos of the paddlers. We disturbed a pennant-winged night jar on the way up, and also grabbed some images of the colony of ‘flying foxes’. One of the larger Kivu boats approached the island, and we were amazed to see a herd of cattle – they had swum a considerable distance from the main land, we presume – in the water next to the chugging wooden craft. (The latter was laden with at least a dozen more cows).

A few snacks later PVK and I headed off, with a leisurely stop at the remote and gorgeous #KivuLodge. We had beaten the Isuzu South Africa #Xriders, which meant a bonus lunch before taking on the final 16km. The wind had by now picked up markedly, but the weather looked as if it would hold long enough as we crashed through jacking swell en route to another wild island camp. Then the storm hit us out of nowhere…

Within minutes, a dark cumulus cloud had stacked up in the east, and soon after all hell broke loose. I thought we might outrun the tempest, but within seconds we were enveloped by a solid wall of rain churning up the surface towards us. Sniping gusts of wind soon whipped Kivu into a frenzy as we turned tail and made a run for shelter. A small headland offered some protection from the rain sheeting down, and we cowered here for 45min while waiting for the storm to abate.

With temperatures dropping, we made a call to run the gauntlet of lightning strafing the lake, with next-level celestial fireworks spider-webbing along the nearby Congo skyline. By now it was properly dark, but fortunately managed to hook up with our wooden Rwandan support boat, with the crew and passengers well shaken and stirred. They had waged their own elemental war with the storm, to the extent where their flimsy craft was stranded in no-man’s land, buffeted by the swell and gusting wind while dangerously taking on water.

Line of sight navigation had by now become a gamble along the rocky shoreline, so after paddling for another hour with head torches without any sign of the designated camp, we voted to make landfall at the first suitable spot. This, my friend, is easier said than done in a densely populated country like #rwanda…

Within 60sec of us landing on a relatively remote grassy bank – with a cow lowing forlornly for company – villagers were streaming down from the surrounding hills to check out the wizardry of dry bags, pop-up tents and drowned-rat mzungus. A self-appointed fire chief soon had a blazing pyre going, and we settled down to a quick bite. The only downside of the evening was a papsak of warm white wine, courtesy of Albie, certainly not the most manly way of celebrating survival on the high seas (or lake, in this case).

So here we were: drenched, with damp kit, no red wine, and stuck with a bovine background soundtrack. On the plus side, though, we were all in one piece after an adventure no money in the world could buy, all in one piece and good spirits, without having driftef into the DRC’s territorial waters. In my books, that counts as a major win, so pass that blerrie Drostdy Hof