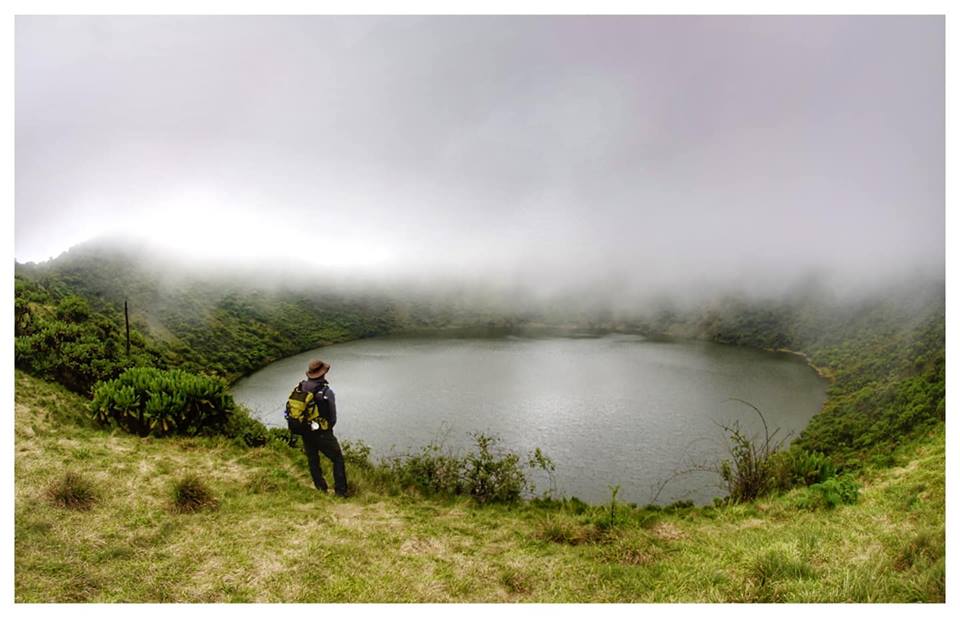 Otherworldly. The landscape beyond 4000m above sea level is a surreal and inhospitable place, with whiteout light and bizarre plants making for Tim Burtonesque backdrops to the world you left behind way down below. Giant lobelia and contorted cenessio trees loom from the mist, laden with moss and gossamer epiphytes. These botanical dinosaurs ghost up from fecund bogs where the primal smell of midnight black clay rise up as you squelch knee-deep along ever steepening trails.

Once you ascend to above the mist-forest zone, sub-alpine grasses and lichens take root, hunkering down against the tempestuous sub-zero gales strafing the peak. And finally, even the grasses capitulate, and you are left to trudge through a gritty layer of volcanic ash, seemingly devoid of life. It is an icy, stark and lonely place, and in my case, a space you want to get the hell out of, pronto, before your fingers freeze off.

That was a mental snapshot of #Karisimbi Peak for us today, at 4507m the highest of Africa’s volcanoes. It is by a long shot not the most technical of climbs though, but makes for a damn solid trek nonetheless, and certainly not an ascent to be taken lightly. Proper kit is needed for the summit, and you will face up to bogs, swamps, slip-sliding clay and a fair bit of that thin-air feeling as your lungs go into bellows mode.

“A little walk up a hill”, was our initial thought, so we decided to spice the adventure up by chucking in another peak for good measure. #Bisoke is probably the most popular of the #VolcanoesNP treks here in #rwanda, with its sublime caldera lake rated as one of the major tourism draw cards, other than the gorillas.

The steep and slippery trail proved to be excellent fun for the whole Dunlop Tyres SA #BeyondTheRiftValley team, but the climb to 3700m is certainly not to be sneezed at. At the summit, the mist lifted for just long enough to unveil the tranquil crater lake (and for a white-necked raven to swoop down and steal our container of peanuts). A high-speed descent then saw us change guides and head into a sublime section of deciduous rainforest blanketing the approach to Karisimbi. Basically, we had to climb back up to about 3600m, where a rudimentary overnight camp awaited.

As these volcanoes bristle right upon the edge of the DRC, we were accompanied by a contingent of RDF soldiers who regularly patrol the area. They soon had a fire going where they and the guides roasted corn on the cob and jacket potatoes in the coals, oblivious to the occasional rain showers sheeting in from the Ugandan peaks to the north.

These occasional showers soon morphed into a torrential downpour, with sheet lightning strobing the thick cumulus build-up. Pistol developed a massive headache during the night, and made a call to stay at camp, with me and Peter Van Kets setting off just after sunrise to bag this African beaut.

There were a few moments where I thought it might be a good plan to hide behind a cenessio trunk, but in the end good old vasbyt and a dollop of peer pressure ruled the day. The summit itself is not pretty, with a jumble of telecommunications equipment, but the sniping wind and severe cold meant we grabbed a quick photo or two before hoofing it back down.

A week into our visit in #RemarkableRwanda, and we are still blown away by the incredible adventures and beautiful people of this gem of a country. It is a place I would love my family to experience, and I can’t wait to see what tomorrow will bring. I believe there are golden monkeys on the menu …