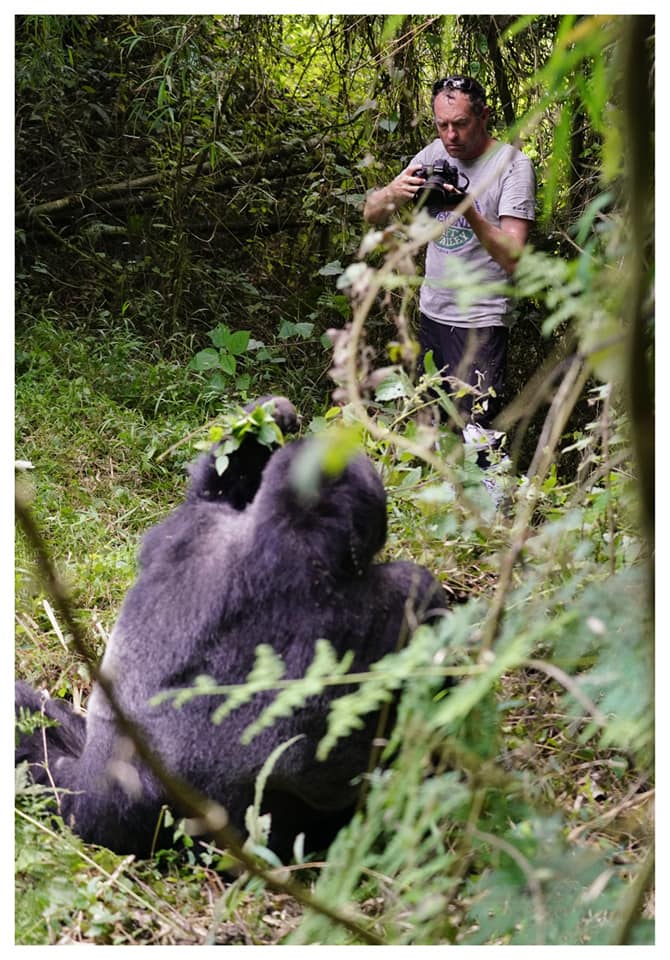 Words. They don’t come easy, sometimes. So far, the Dunlop Tyres SA#BeyondTheRiftValley Expedition has been infused by superlative experiences, to the extent where you go into an adjectival daze. We’ve climbed kickass volcanoes, paddled a paradisiacal lake, trekked along emerald forest trails, navigated some of Africa’s most remote gravel tracks in the Isuzu South Africa #xriders, and been utterly enthralled by the breathtaking landscapes and people of #RemarkableRwanda.

And just when you think there can be no other experience to top those that have gone before, you get a once in a lifetime opportunity to come face to face with Rwanda’s critically endangered gorillas. Being up close and personal with a giant silverback male is everything a bucket list experience could be, and this makes for emotions where words begin to fail me …

The trek in from #VolcanoesNP HQ set the scene, with the #BTRV crew quietly tramping through vast fields of stinging nettles and the wayward sway of giant bamboo forests. The tender shoots from these mega-grasses are the staple food of ‘gorilla beringei beringei’ – the Eastern highland mountain gorilla – and we started seeing signs of the Igisha Troop we were tracking within half an hour of starting our walk.

The troops are named for their silverback alpha males, and the extensive rainforests of Rwanda provide sanctuary to 20x groups, 12 of which have been habituated over the past few decades. Interaction with humans are strictly controlled, with a minimum distance of 7m and duration of 1hr enforced. (We would soon find out that the gorillas do not necessarily subscribe to these man-made rules, though).

Once we were within a few minutes of the troop, we dropped our bags to ensure we could quickly move through the bamboo thickets, and then followed the trackers into a clearing. Boom! First contact was with the forceful Igisha himself; this hulking silverback was squatted down in a grassy nest, contentedly snacking on a bamboo shoot while harrumphing from the pit of his stomach.

I had moved in next to one of the trackers, squeezed up against a dense bush, when I felt the guide tugging on my trousers. Assuming I was too close to Igashi, I moved further back, now nearly inside the bush. When the ‘guide’ started hugging my thighs, I got the idea: this wasn’t a human squeeze, but rather an inquisitive juvenile gorilla that had sneaked past the watchful eyes of our minders to check out this puny and hairless ape. Suffice it to say I moved along pronto!

The next hour blurred into a time warp of soulful, brown-eyed stares, sub-sonic stomach rumbles, deep-down-from-the-belly sighs, the juicy crunch of bamboo shoots, and – every so often – an unashamedly brazen gorilla fart. We got a couple of minutes of ‘extra time’ before we had to say goodbye to the Igashi Family (they no longer felt like a troop to us), before we watched them fade into the jade bamboo shadowland surrounds.

I can’t put into words the thoughts and emotions pulsing through our collective consciousness right there and then. And in many ways, I don’t want to. Instead, I’d rather let those feelings germinate and take root, to grow and take shape as one more facet of the incredible experiences we had here in the ancient heart of Africa’s Rift Valley.