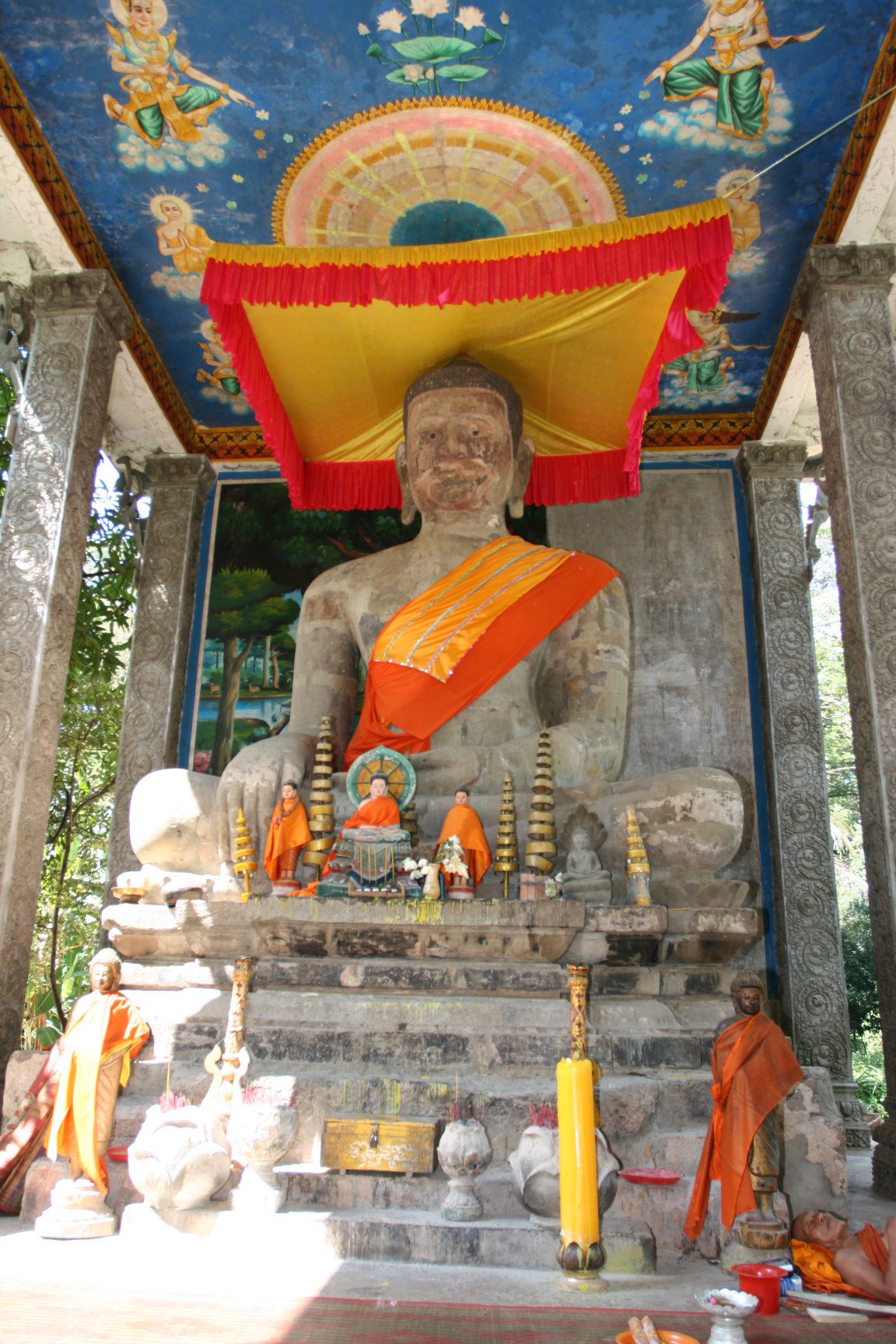 Of all the destinations within South-east Asia, Cambodia is probably the one you will find on any serious traveller’s hit list. The country is best (and often only!) known for the gargantuan temple complexes centred around Angkor Wat and Angkor Thom. It is therefore not unusual to find travellers jetting into Siem Reap from Viet Nam for 2 to 3 days before continuing on to Thailand, Laor or Myanmar.

Our flight from Ho Chi Min City on Vietnam Airlines takes just 45 minutes before we touch down in Siem Reap, at first sight a rather unimpressive jumble of brash buildings surrounded by jade jungle on all sides.

If Siem Reap is unimpressive, it is only so as to lull you into a false sense of somnambulance. Drive beyond the straggly urban sprawl and get ready to be blown away. The main temple at Angkor Wat rises up from the steamy jungle like a vision from a scene from Planet of the Apes, all towering spires and tumbling rock walls. It’s not big, it’s not huge, it is absolutely humongously gargantuan.

Archeaologists estimate that approximately 1 million people lived here at the apex of the ancient Khmer empire. A veritable village, metropolis spread for many sq. km around the various temple complexes, shaping a city larger than any contemporary in Europe at that time. It was only during the 15th century that the Siam empire (today known as Thailand) conquered the area near Angkor, forcing the Khmer to move south and establish a new capital where Phnom Phen stands today.

King Sihanouk?? and his followers might have been forced to flee Angkor, but what they had left behind stands testimony to this day of their once mighty empire. Our first stop is at the Pro Tham complex, an overgrown temple dedicated to Buddha and famous from many of the scenes from Tomb Raider, which Angelina Jolie filmed here.

We follow Thuc, our guide from Destination Asia, into a fantasy world of carved rock and contorted tree roots, with our footsteps resonating with the footfalls of thousands of monks and worshippers who walked here for many centuries. Incense wafts from dark corridors where headless statues stand guard, and once or twice we glimpse the blood-orange robes of monks hurrying along amidst the shadows. Time seems poised in a precarious equilibrium where rock and tree and humanity cross over the ages, and I feel a sense of helplessness in trying to somehow capture this on film and describe it in words.

An hour (or a few?) flit by in the blink of an eye while I wander amidst the breathtaking spectacle that is Ta Phrom, and then we set off to catch the sun setting behind the spires of Angkor Wat. While races from right around the globe stream past me, I try to somehow capture the end of an extraordinary day in this otherworldly setting.

My task is made simpler by the arrival of Phremm, a young Buddhist monk swathed in robes of vivid orange. We start chatting and he soon agrees to pose for a few photographs. With his serious face, round glasses and shaven head, he looks a little like a young Ghandi as he perches on the age-old moat wall. Later that evening, Phremm and three of his colleagues arrive at the hotel to collect a CD of the photos I promised him, and we sit and chat for an hour while I show them images from my travels around the world.

As spectacular as Angkor Wat is at sunset, the best time to experience the temple’s innate spirituality is at dawn. Which means a 04h30 wake-up call and a torch-lit walk into the ruins itself. It is so worthwhile though and I guarantee you won’t miss your bed for one second. Hundreds of people amass within the 500km² grounds of Angkor, but a perceptible hush descends upon the gathering when the sun tints the eastern horizon in amber hues. Twenty minutes later, it ascends like a ball of fire, hovering for a short while above the jungle haze before firing up the sky.

Although Angkor Wat may be Cambodia’s flagship temple, many other await your discovery. Within Angkor Thom (or Big City) you will find both Prean Khan and the incredible Bayon, rated by many as the highlight of any visit to Siem Reap. Then there is also the arresting pink marble of Bantaey Srei Temple, approximately an hour away, and a host of other, lesser known sites.

Just in case you’re wondering, Cambodia offers a host of pleasures beyond the scope of its undeniably awesome temples. A drive out to Tonle Sap, South East Asia’s largest freshwater lake, gives you the opportunity to explore the fishing communities stretching along the shoreline here. Two floating villages, one Cambodian and one Vietnamese, migrate with the retreating waters of this lake as it recedes during the dry season.

The Vietnamese, who stayed behind when their country’s soldiers departed after 10 years of fighting against the Khmer, remained and have to a large extent been assimilated into the local community. They have however retained their cultural identity, and the smells, sounds and sights of their village transport you to the Mekong Delta. Everything floats, from schools and general stores and restaurants to a Catholic Church and a crocodile farm. Kids paddle by in plastic buckets and pigs grunt contentedly in sties bobbing on the gentle swell of this amazing inland lake.

Around 250km up-river, life is lived at a very different pace in Phnom Phen, the frenetic capital of Cambodia. One’s first impressions are of a hard-nosed and unapologetically materialist city trying to rise above the social problems so often plaguing a developing nation.

Like with Saigon, the city serves as the primary driving force to the nation’s economy, with a burgeoning garment manufacturing segment exporting goods all over the world.

Break through the people’s big city defences, however, and you will immediately tap into the gentle and welcoming nature resonating within all Cambodians. It is this innate spirituality that stands at odds with the many atrocities committed here during the reign of Pol Pot and the Khmer Rouge. There are stark reminders to his reign of terror everywhere, from the chilling hallways of S–21 to the tragic largesse of the Killing Fields unfolding approximately 1½ hours from the city.

It is therefore no wonder that both of the afore-mentioned places feature high on most visitors to Phnom Phen’s ‘To-Do List’. Our first stop is the sublime Royal Palace, an immaculate architectural conception in the Buddhist building style rising above the leafy avenues of the city’s riverfront. With views across the confluence of the Mekong and Tonle Sap Rivers, this must rate as the world’s most arresting Royal residence. Beds of yellow chrysanthemums, perfectly manicured bonzais and kabuki-styled shrub surround the breathtaking palace, banquet hall and the residence of King Sinamuhafi and his father, former King Sihanouk. Lush gardens, dotted with stupas (to keep the ashes of former Kings and Royal), stretch beyond the palace grounds to the Silver Pagoda, where the power and glory of the Khmer history shines forth from a seminal collection of artefacts spanning 1000’s of years.

A more recent history of Cambodia, and an altogether more chilling one, awaits you within the bare rooms and subdued corridors of the Tuol Sleng Jail. Universally known as S-21 (for Security Office 21), this is where the brutal and feared Pol Pot regime incarcerated, tortured and murdered thousands of people during a reign of terror lasting from 17 April 1975 to the end of the 1990’s.

Under a ‘plan of unprecedented ultra-communist social engineering’, an estimated million or more Cambodians died while the utter fabric of their society unravelled. Money was abolished, intellectuals and their children were exterminated and the general populace were driven from the cities to form ill-equipped and imminently doomed agricultural communes. For more than 2 decades, social decay and military offensives against Cambodia by Viet Nam, saw the Khmer people reach one of the lowest points in their long and illustrious history.

But this is a resilient people and even more than 20 years of utterly unspeakable terror could not extinguish their easy smiles and innate kindness. All you have to do to experience this is to wander through the Russian Market, a buoyantly bright and gratifyingly fragrant pot-pourri of spices, earrings, knock-off Levi’s and pirate DVD’s, and you will understand why the Khmer nation remains one of Planet Earth’s greatest civilisations.