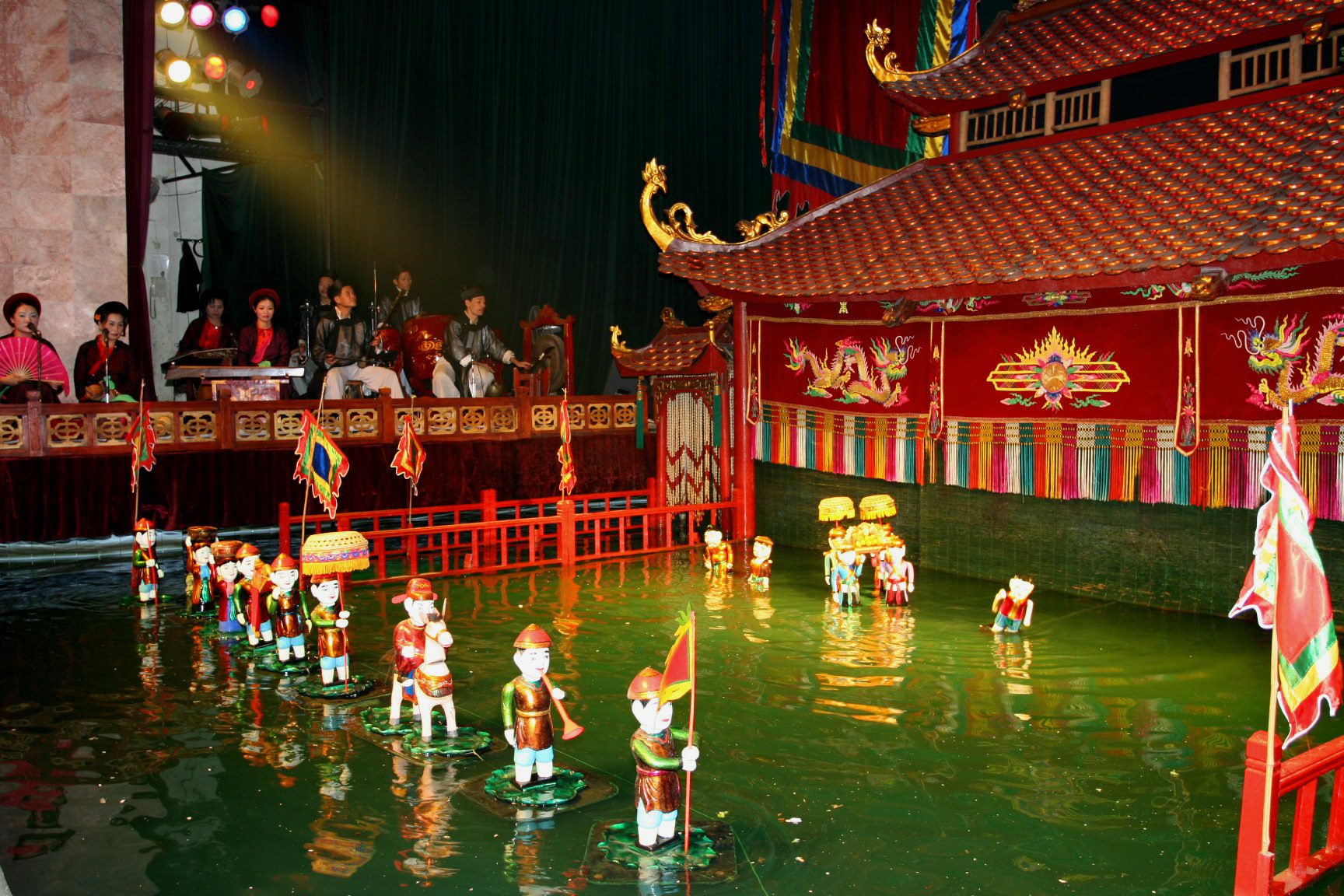 “This is a mindfuck”, I think as I stare at the motorcycle labouring along next to our car. “We have scarcely left the airport and here, on the highway, is a 110cc motorcycle stacked with three huge, pink pigs”. Three horizontal shelves, attached to the rear of the slight driver’s seat, stack up into a pork pyramid to support the animals. The pigs themselves, wrapped in wire netting, stare out unperturbed at the traffic stream as if this is just another regular day in the life of an Asian swine.

For me however, this is my first visit to Vietnam, and it certainly does not qualify as an everyday experience. It is a country unlike any other country I have visited, and the unbridled energy of the place hits you as soon as you set foot outside the airport.

Hooters blare, trucks rumble, lights flash, and thousands upon thousands of motorcycles tumult past as we approach Hanoi. I foresee a flurry of accidents, fender-benders, at least a fatality or two, but none happens. And that is the rub, the weirdness of this place where Oriental and Indian history rushes headlong into a shared culture.

“Balanced chaos” or some similar dichotomy (contradiction in terms) probably describes the atmosphere best. Imagine a million hornets humming around a hive, and you’ll have some idea of Hanoi’s rush hour. The traffic is like an endless, choreographed action sequence of close calls, near misses and split-second decisions. But there are no accidents. Despite honking and gesticulating, the stops and starts, there are no mishaps.

Push-bike, cyclos, motorcycles, cars and pedestrians weave in and out amongst each other amidst the stunning French architecture, characterising the northern capital of Vietnam. “One beep; I’m right behind you. Two beeps; I’m coming through. Three beeps; now I’m getting a bit irritated”. This is how Ahn, our guide from Destination Asia, translates the incessant ‘Hooterese’. He also comes up with a précised version of Vietnamese history as we head for the Safitel Metropole, a sublime hotel set within the heart of old Hanoi.

In present-day Hanoi, being a tourist is all about trust. To cross the roads, you have to centre your chakra before you serenely step into the demented traffic stream. Walk slowly, yet purposefully into the rush and marvel at how it divides and flows around you until you reach the safety of the opposite side. When you order an item at a local street café from a beautiful girl who speaks no English, you have to trust that it is indeed chicken. And when your cyclo driver pedals you into the delightful decay of the Old Quarter, you have to trust you will find your way back to the hotel.

Also, forget about the one-sided portrayals of Viet Nam as per a hundred Hollywood movies. It is time to re-train your senses, get them ready for the unexpected. Savour the tastes of tantalising ton won or frog steamed in a clay pot with garlic and ginger. Revel in the willowy curves, angular faces and coal-dark eyes of people so beautiful you’re tempted to touch their lustrous skin just to make sure they’re real. And from every house, shop, hotel and street corner this continuous and delicious siren song of sights, sounds, tastes and smells will surreptitiously tempt you deeper and deeper into the wonderful world that is Viet Nam.

So how would one spend a day or two in Hanoi? Easy enough, as there are a whole list of cultural must-do’s. Add these to your list: a visit to the Ho Chi Min mausoleum and his spartan home; wander amidst the Confuscian glory of the Temple of Learning and try to assimilate a smidgen of the many ages of Viet Nam history; marvel at the tranquillity of the One-Pillar Pagoda; and be sure to visit the Lang Thruong Water Puppet Theatre, a traditional performance art portraying a slice of life scenes from local culture.

No visit to Hanoi is complete without a visit to the Old Quarter. Here cobblers, ceramicists, tailors, ironmongers, cooks and all manner of craftspeople go about their daily business. In many cases the tools and methods they use are the same as those their grandfathers’, or maybe even generations before that, utilised. Perpetual motion, incessant stimulation, intercultural connectivity, down-loading along every synapse into the central nervous system, into the brain, into the soul.

And when you decide it is time to chill out, book yourself in for a traditional Vietnamese massage at one of a slew of holistic health centres. Chances are you won’t understand a word your masseuse says, so just lie back and let her hands do the talking. A combination of manipulation, deep-muscle massage and pressure point stimulation will leave you relaxed and ready for your next flight.

From the hubbub of Hanoi, we fly to Da Nang, once the headquarters of American operations in Viet Nam. It is a short drive through to Hoi An, where we’re booked into a hotel right on the edge of the enigmatic Old Town. Sprawled along the banks of the … Thu Bon River, this historic village has recently been declared a World Heritage site.

After 2 days in Hanoi, the tranquil village streets and slow pace of life offer a refreshing change. Lose yourself (and a handful of dollars) as you navigate the narrow alleys lined with tea houses, lantern shops and some of the most famous tailors in Viet Nam. Despite its “tourist hot spot” status, Hoy An is a shopping Mecca and a combination of affordable prices, good quality and slick sales talk will soon have you waving your dong around. An exquisite silk shirt costs as little as $6, while embroidered handbags start from $2.

One of the best ways to experience Hoy An is from a traditional rowing boat. These archetypal Indochine craft (known locally as sampans), line the riverbank, with an assortment of black- and gold toothed sailors clamouring for your attention. I hook up with a gleeful old scarecrow of a man, who promises to show me the world and more for 15 000 Duong (approximately $1).

While I sit cross-legged in the prow, he chatters away while working the boat up-river. We pass sampans, only slightly bigger than a kayak, where fisher families live with only a rolled reed mat to protect them from the elements. Taxi boats, piled with black bicycles, baskets crammed with chickens and a posse of passengers tuk-tuk-tuk along the brown river.

The attraction of Hoy An is very much its leisurely pace of life and, once you’ve shopped, been to the temples and craft shops, and seen the Japanese Bridge, your mission should be to do as little as possible. Adventure options await those in search of an adrenaline fix, however, with various beach resorts offering activities such as parasailing, wet-biking, aqua sports and boat trips to the nearby Cham Islands.

Our time in Hoi An is soon at an end, with Ho Chi Min City looming large on our agenda. Previously known as Saigon, this is Viet Nam’s largest city by far. And with more than 8 million people and a plethora of major industries, it is also the country’s busiest metropolis. The fact that there are 3 million plus motorcycles humming along the streets, you feel as if you’ve stirred up a hornets nest when you buzz into the rush hour traffic of Ho Chi Min City.

If Hanoi is to Viet Nam what Durban is to South Africa, Ho Chi Min City is unarguably the country’s Johannesburg. Even though the people are still friendly and warm, they go about their business with a sense of purpose. Business cards are a must in this amazing metropolis, and the first thing you do when introduced to someone is to exchange business cards.

We are based at the Majestic Hotel, overlooking the industrialised sweep of the sluggish Saigon River. Up to just after the Viet Nam war (when a north Vietnamese tank burst through the gates at the Re-unification Palace), the city was known as Saigon. It was only in 1976 that the name was changed; but most locals still prefer Saigon, although people from the north and central regions use Ho Chi Min City.

A day or two gives one more than enough time to visit the various tourist spots in and around the city. The HCMC and War museums offer a disturbing glimpse of American atrocities during the war years, while the Palace of Re-unification gives additional historical insight. For a more hands-on experience of the life and times of the VC, a visit to the Cu Chi area is a must.

The area, a VC stronghold during the peak of the war, constitutes an extensive tunnel network used by guerrillas to fight the Americans. More than 200kms of underground crawl-space were used during daring attacks and tactical retreats during an extended period of allied bombing. Ground operations of the enemy were further slowed down by a series of ferociously vicious jungle traps, with anything from poisoned bamboo spikes to barbed swing-weights set along the forest footpaths.

Extensive use of defoliant and other chemicals in the area, combined with carpet bombing raids came to naught in the Cu Chi area. During the day, the villagers tended their fields, but when night fell, they would link up with the rebels in the north via the Ho Chi Min Trail system. Legendary fighters were born here, and many of these heroes are revered to this day by the people of Viet Nam.

In 6 days, we barely scraped the surface of this seductive country and its beautiful people. To the north lies the La La Lói ?? hill tribes and incredible trekking routes of the Sapa region. Cat Ba National Park and the breathtaking karst islands of Halong Bay await discovery. On the Mekong Delta, travellers may lose themselves amongst floating markets and thatched villages built on stilts. And then there are the people; 54 ethnic groups with a combined culture seaming through decade upon decade of a diverse and rich history. Always welcoming always beautiful and always smiling, they are the most precious attraction a country could wish for.