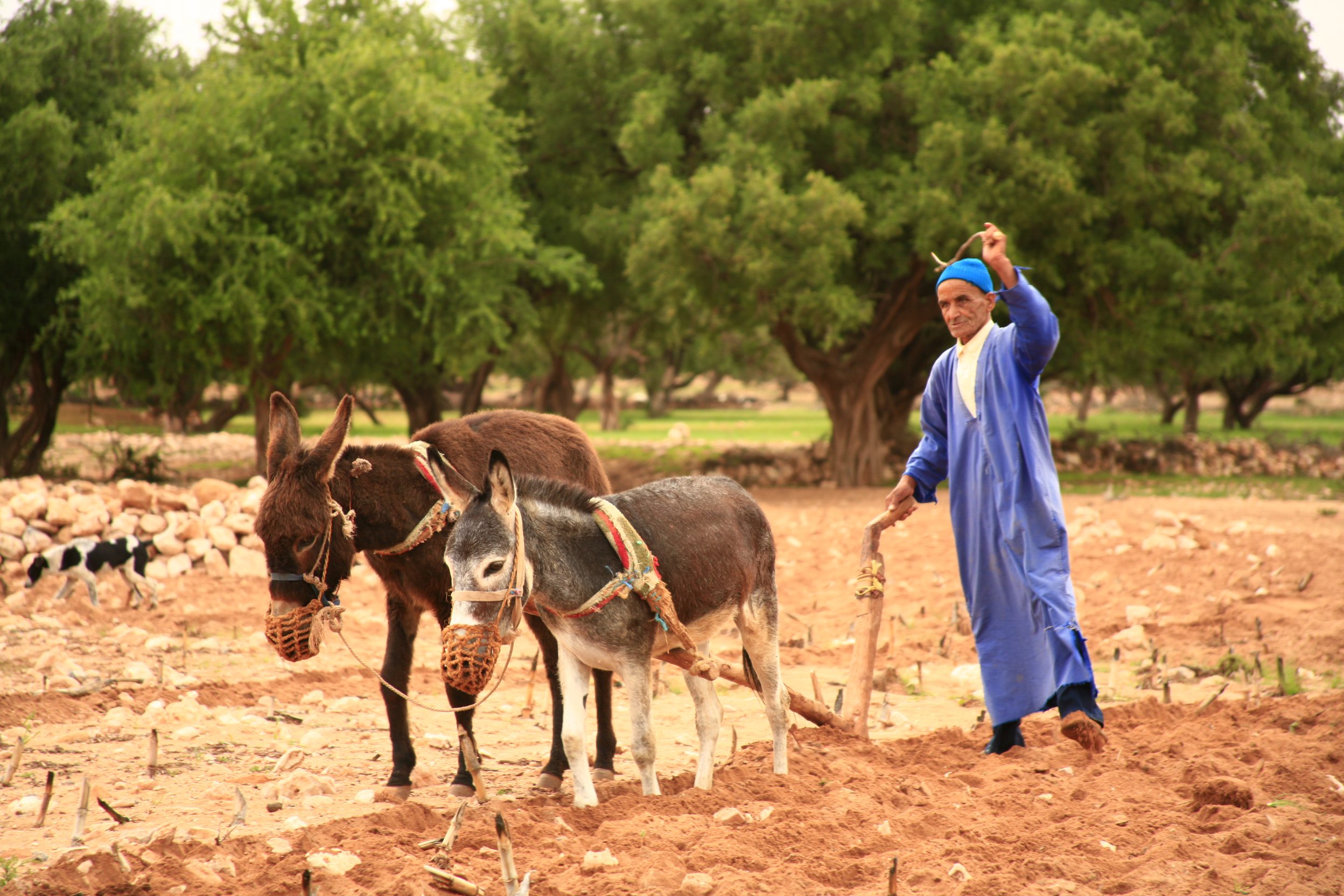 This time, the travel gods did not so much smile on me as engulf me in an unadulterated embrace. Flying, generally a tedious and mildly unpleasant affair, was elevated to utter and absolute enjoyment, courtesy of a business class booking by Land Rover.

So, from the moment I stepped on board Iberia flight 6050, I felt and acted like a kid at Christmas time. Woolly socks! Put them on! A reclining seat! Test all the buttons! Free toiletries! Apply lotions liberally.

Once I had finished eating (accompanied by some excellent roija wine) I was so laid back that I went right to sleep. Pity, as there were some great movies on the private channel.

So be it. I had a great sleep and we’ve just landed at Madrid Airport, around 08h50. I expect the transition to take around an hour and a half, so we should be in Morocco by midday.

Not that I have a clue what to expect. Because this is such a lightning trip, I’ve not even taken a cursory dive into a guidebook which makes Essaouira a bit of a blank page.

Right, so arrived in Madrid. Thing is, my luggage has gone walk-about and is probably in Kazakstan or some strange country as we speak. The Iberia staff are as helpful and friendly as one could expect, but the bottom line is that I’m stuck without clothes and more importantly, my laptop and camera cables and chargers. Bummer. But I’m sure I’ll somehow sort it out, even if it means wearing a dishdasha for the rest of the trip. Managed to also squiz through Murray’s rough guide to Morocco and now know a bit more about Essaouira.

Situated on the country’s barren southwest coast, the region has been a late tourism starter. Argan camel trekking, kite boarding and windsurfing and the hippy culture of the sixties has morphed into a laid-back funk suited to contemporary adventure travelers.

Originally known by its Spanish/Portuguese name Magador, Essaouira was established in the 18th century as a free port. Even before this it was a pirate enclave, and the blending of local, Jewish, Arabic and European cultures lends the town a feeling of dilapidated elegance.

The ramparts, or scala, stretch as a soaring tumble of fortifications along the Atlantic Ocean and this remains Essaouira’s major attraction. Cannons and fortified walls overlook the Isles Purpuraires, once a factory which manufactured a sough after purple dye from a local shellfish.

Other attractions include the fragrant carpenters’ souk beneath the ramparts, a jewelry and costume museum, the annual Gnoua Music Festival, an excellent selection of small bistros and eateries popping up near the beach and a coastline famed for kite surfing and windsurfing.

We land at Essaouira’s small airport and get past the Saddam look-alike security guards without incident. The Land Rover crew is waiting for us and we’re divided into groups of two per Freelander. Then it’s time for actions as we five up the spunky little landies and head off up the coast.

Morocco is biblical beyond belief, with tiny adobe-style villages occasionally popping up amidst stunted groves of olives and argan trees. Rocks cover the ground as for as one can see, yet tiny wisps of grass and scrubby ground cover somehow manage to force their way from the sterile-looking earth.

The roads are great; roughshod and zig-zag passes winding past low-slung earthen buildings and we even manage to fit in an obstacle section looping through a series of beach dunes.

Our convoy of a dozen vehicles noses back into Essaouira just before sunset, giving me 15 minutes to sneak into the souk for some photographs of this teeming street market here in the Old Town. I also end up bargaining with the locals while trying to replace at least a few essentials from my missing luggage.

Later that evening we sip cocktails on the flat roof of the hotel, listening to the Moroccan sounds drifting up from the centuries-old medina of Essaouira. It is a pleasant evening and we dine in the comfort of our hotel, the very luxurious and elegant L’Heure Bleue.

We’re again putting the Freelanders through their paces, this time heading inland before navigating the outer reaches of the Sahara in a northerly direction. The scenery alongside the road is straight from the Middle Ages. Gaunt men in jaballa robes till rocky fields, striding tirelessly behind camels, donkeys and bullocks yoked to creaky wooden ploughs. Donkeys are used for transport throughout Morocco and often look too frail to handle the tottering passengers and their belongings.

The country is strictly Muslim, with people praying out in the open whenever the spirit should take them. If they find our convoy of hi-tech Land Rovers the least bit interesting, they’re not really letting on.

It is only the children who, especially when we stop at villages, come out to gawk at vehicles which could very easily have been space craft from their very rural and Luddite perspective.

We eat an authentic and fragrant stew at a beautiful home set within the greenery of an oasis, tucking into the spicy vegetables and meat before finishing it off with a cup of coffee that could easily strip paint from one of the vehicles.

Some more sand driving is in store as we leave the road and trip north along the beach to Essaouira. There are a few high dunes thrown in and it makes for an exhilarating end to the day. The sun is a red ball of fire settling over the medina as we purr into town, chugging back a few welcome beers to dislodge the Sahara dust from our throats.

It’s another late night for me, downloading photos after supper and then filing a story for Cape Times. Finally get to bed around 02h00, so ends up being a short night.

Decide to make a quick dash down to the harbour area to capture some of Essaouira’s local colour before heading out on our final drive.

Our route takes us south through the town of Tanamar, but the road markers and signs indicate exotic destinations such as Casablanca and Agadir. These are romantic names in anyone’s book and I can’t help but wish that Murray and I could just peel away from the convoy and keep going.

We’re driving the new Range Rover TC V8 today, and the schedule is way too tight to dawdle. Tea is in a colourful Bedouin tent on the edge of the escarpment, with views across the wide and arching bays punctuating the steep sea cliffs.

The day flies past and before we know it, we’re back on the charter flight to Madrid in Spain. I’m meeting Lize-Marie here (she’s flying over from France) and we’ve arranged to meet at the Hotel Arosa.

I can’t be asked to negotiate the Metro with all my bags and cameras, so I hire a taxi to drop me near the hotel right within the city centre. LM gets there a couple of hours later and we make our way to a local parilla bar where we gorge ourselves on the stunning ham that Spain is so famous for.

A day of doing touristy stuff, which is not a bad thing now and then. We tramp off in the direction of the Oriental Plaza and the imposing Royal Palace. It is a faultlessly beautiful structure, a sweep of marbled opulence curving along an open square and through neat and well-kept gardens.

We pop into the beautiful basilica of “Our Lady of Almudena” and then continue through the narrow alleyways towards the Christmas fair at Plaza Mayor. The crowds are absolutely ridiculous though, as if Madrid is bursting at the seams, and after a stint of tourist shopping we decide to duck into a tapas bar to escape the crush.

More Serrano and Iberian ham, with a creamy draft of Mahou Beer, and we’re ready for the afternoon. We end off our final few hours in stylish Madrid at the Del Rey Art Centre. Their permanent collect brims with paintings by Salvador Dali, Joan Miro and Pablo Picasso, which does not make for relaxed viewing. The highlight for me is the mural-sized Guernica, one of the artist’s seminal works, as well as an impressive range of paintings and sculptures by other celebrated Spanish artists.

Thirty six hours in Madrid is not nearly long enough and I would have loved to spend another couple of nights. However, Cathy, Beth and Robbie are waiting for me at home and there is no way I would swop this city for them right now.