Of Dog Stones and Plat Snoeks … 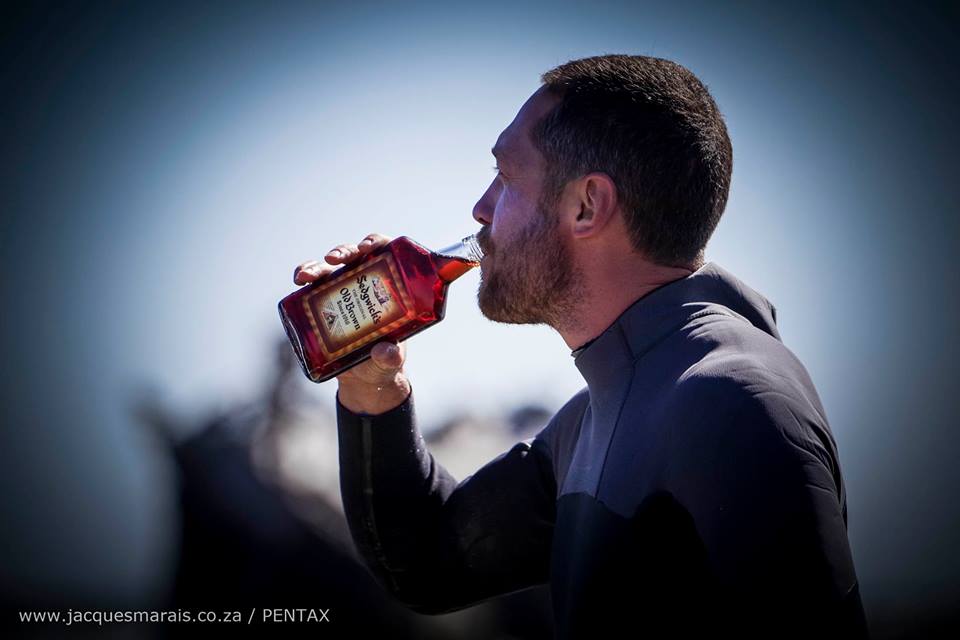 This is the story of #PlatSnoek. According to our local man on the ground, Dudley Bruce Wessels, the only way to survive the 8 Degree Celsius waters of the #WestCoast is through liberal application of said ‘Plat SNoek’, aka one of those flat bottles of #OldBrownSherry.

The correct methodology seems lost in the mists of time (or haze of #OBS), but the best way – as always – is to take a big swig, and then to slip the #PlatSnoek into the back of your wet suit before paddling out. Once your ice cream headache clears and your fingers start working again, another dose is called for on the back line, where you then toast Neptune (or any other ocean diety you feel may protect you against the thumping swell).

We did this, but still got thumped, properly. There was a snapped leash and smashed board for Zane Schmahl, as well as some seriously close calls with the serrated reef snarling along the #Hondeklip shipwreck as we battled the surge to safety, but it makes for a great camp fire story. And it definitely hones your skills for the next tempestuous clash …

But before we could get to the surfing, we had to face up to a few blistering cranks on our mountain bikes along those endless jeep- and 4×4 tracks traversing the expansive #NamaquaNP. If you want a #gravelbike experience of note, look no further than this arid and diverse #MTB Paradise up in the #NoordKaap.

A huge Thank You to Angela Isaks and her superb SANParks – Namaqua National Park Team for arranging not only the accommodation at the breathtaking #SkilpadRestCamp, but access to the varied sections of this 165 000ha wide-sky conservation space. Up here, a palpable sense of pride in your work prevails, and it’s immediately obvious through the easy smiles and friendly attitude of the people.

And here on the edge of the park, life brims with larger-than-life characters and dorps and legends. We got to braai with Dudley – the ‘Honey King’ and unofficial Mayor of #Koingnaas, second in charge only to his wife, Aletta, and listened while spotted eagle owls hooted away into the arid quiet of the Namaqua night. Big up to Peter Van Kets who opened up his house to me, Peter Kirk and the EcoBound Mountain Eventscrew – I promise we were good!

Just down the drag you find Hondeklipbaai, where you may see the ‘Dog Stone’ IF you look from the right angle, and IF you’ve had the prerequisite number of brandies and coke. There’s also the Namaqua Camino, a new multi-day meander, allowing you to slack-pack along a breathtaking route traversing both the desert plains and ocean edge.

All of this formed part of our Open Africa Route Scouting mission, with a view to establishing a brand new #mountainbike Stage Race Route here along the remote #NamaquaCoastalRoute. In addition, we looked at #BikePacking routes and a handful of solo trails to go and explore, and what an incredible space within which to saddle up the new Giant Bicycles South Africa #Trance!The

The rugged back roads and sandy tracks down towards #Groenrivier proved easy pickings for the Isuzu South Africa#Xrider. Most off-road fundis probably know the area here in the national park, but it was fantastic to have this space nearly to ourselves, despite all the great camping facilities now on offer.

Once again, most of the images were shot on the PENTAX SOUTH AFRICA #Pentaxk1 … and note that the surfing shots were taken by Peter Kirk; shot for that, Pistol!