The Dunlop Tyres SA Beyond The Desert Edge Expedition – 12 September 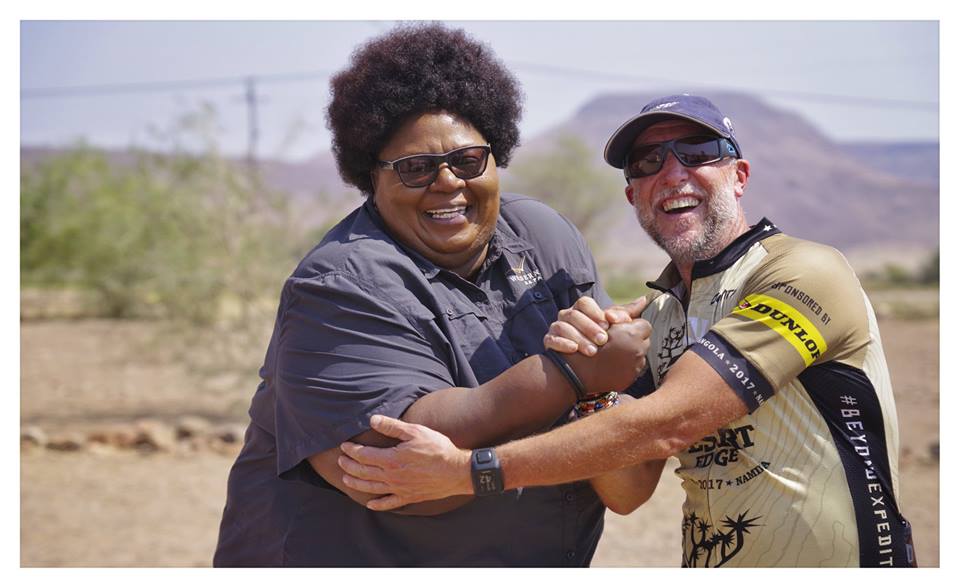 Our Dunlop Tyres SA Beyond The Desert Edge  Expedition navigates its way soutwards via the excessive Torra  shock-rock landscape so typical of the Damaraland  region. This is a land where mankind becomes a miniscule speck against the vast desert backdrop, and where tyres are extremely nervous.

And I have to admit that we had a ‘tyre incident’ this morning, with a side-wall cut inflicting some serious damage. The good news is that it wasn’t a Grand Trek  tyre, so we’re confidently forging forward in our Isuzu South Africa KBs  (when not on the Giant Bicycles South Africa steeds, of course).

The only ‘bad’ news is that we’ve not managed to spot one of the rare desert-adapted rhinos here at the Wilderness Safaris Desert Rhino Camp,  but a whole bunch of men-eyed lion made up for that (to such an extent that even the ever-brave  Peter Van Kets  decided to hitch a lift).

Elephant encounters continue to abound, with the desert ellies striking elegant yoga poses in an effort to reach the bull giraffe browse line … too beautiful! We had two charging into camp a couple of days ago, and last night one wandered past our tents as it followed the Achab River  course.

Today’s ride started with a pre-dawn crank via an alley of contorted albitrunca shepherds trees, after we eventually headed onto the C-Road towards Palmwag.

On the way, we had the privilege of stopping off at the wonderful Bergsig School to talk to the kids about our ride, and also on how we hope to contribute towards our official charity, Children in the Wilderness.

It is fantastic to see the strong conservation ethic engendered here in the Torra Conservancy  through the involvement of Children in the Wilderness  and Wilderness Safaris, and hopefully our initial (small, but we believe it will grow!) financial contribution will help the process of preserving these magnificent wilderness areas for future generations.