The Dunlop Tyres SA Beyond The Desert Edge Expedition – 14 September 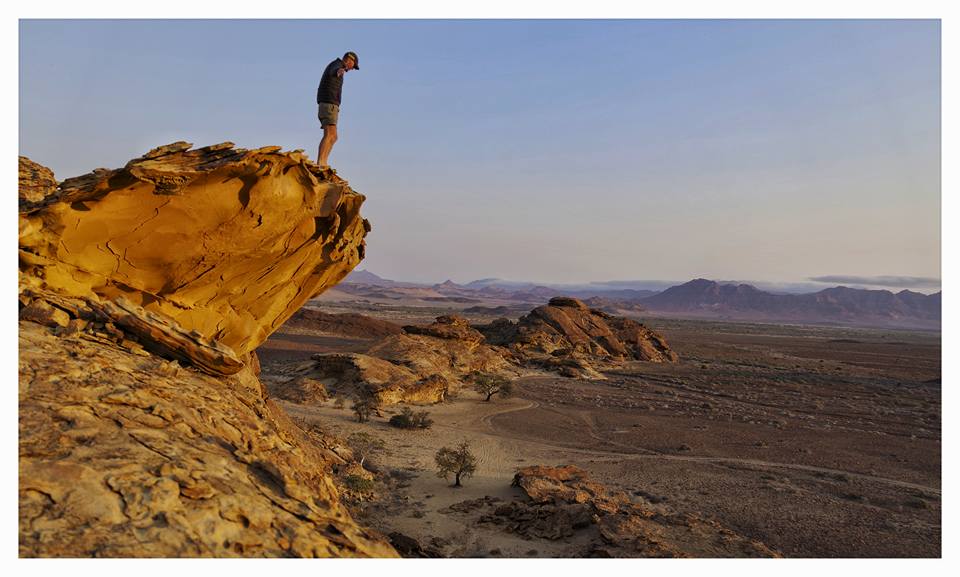 It seems slightly surreal, but we are into Day 11  of our Dunlop Tyres SA Beyond The Desert Edge Expedition. We’ve left the wilderness tracks of the Doro Nawas Conservancy behind, with man-on-a-mission Peter Van Kets bombing along the coastal plains on his Giant Bicycles Anthem at warp speed.

A route change has seen him sneak onto the Henties Bay road on a long slog to the icy Atlantic ocean, before finally cranking onwards to  Swakopmund – we will confirm his ETA soonest. Pistol Peter Kirk and myself are grabbing a wifi moment in the nondescript dorpie of  Uis, our first town experience in nearly two weeks. It feels pretty weird…

Standout place so far – for me, anyway – is the mind blowing Damaraland Adventure Camp, one of the hideaway We Are Wilderness destinations up here in northeast Namibia. Petrified sandstone waves stand frozen above the arid dunescapes below, with cathedral caves galore, leopard spoor all round, and rosy-cheeked love birds swirling like neon confetti against the cobalt sky. I spent hours exploring and gawping at the stars, and eventually snuck into my tent around 2am.

Our route over the past couple of days has exceeded all expectations, with everything from Empty Quarter sized flood plains and shale-shocked canyons to pomegranate-coloured garnet dunes and riverbeds brimming with giant Ana trees. Right now, the monolithic might of  Branberg is lurking with intent on the northern horizon, and a little voice is telling me to make time to run to the famed White Lady rock painting.

The riding has been sublime to say the least, but both the Giant bikes and Isuzu South Africa KBs are slightly grumpy being back on district roads. At least the Grand Trek tyres are continuing to thrive, taking these gravel strips in their collective stride. PVK is getting stronger as the days go by, and he’s bound to shave more time off his epic journey from Angola to Swakopmund.
Big up to Dunlop Tyres SA and all our other incredible partners and sponsors! Isuzu South Africa Wilderness Safaris,  Hi-Tec South Africa Giant South Africa,  SPAR Eastern Cape,  Holdfast, DripDrop,  SPOT Africa Racefood SA, Darling Brew and  BeanThereCoffee Company.