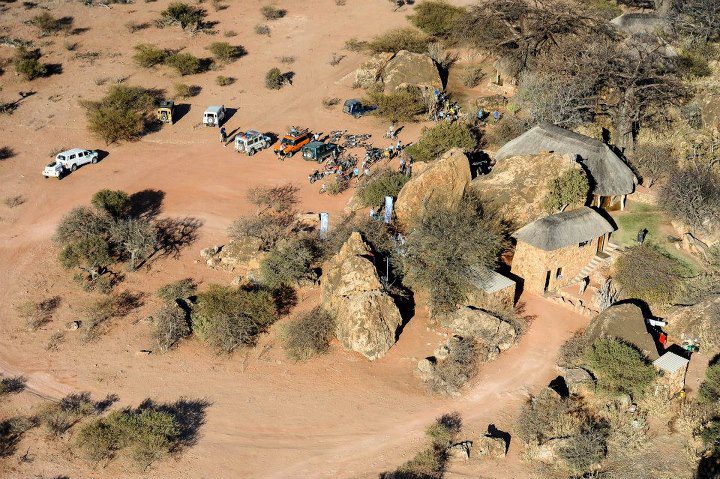 The third day of TdT2012 traditionally kicks in at the top end of the scale when it comes to time in the saddle. As per usual, we set off at dawn, with me short cutting to the tea stop to make sure I get shots of the racing snakes in Group 1. From here, I roamed back and forth along the route, trying to hook up with various groups as they battled a route navigating extreme sand and thorns.By now, I was getting sort of used to riding solo in Big 5 territory, but still nearly kakked my shorts when a kudu bull snuck up on me from behind while lying stretched out in a sandy river bed in wait of teams to photograph. When that twig cracked behind me, Usain Bolt would have looked like a slow motion Os du Randt as I sprinted off into the mopane brush. Minutes after managing to control my heart rate, a crested snake eagle whooshed into the tree above me and flapped around for 30 seconds, only to emerge with a wriggling 3-foot serpent in it’s beak … Incredible to see, and even more amazing to get an actual image of this.When Group 6 came past me near Strat Point 3, I decided to chase them down and get on David Evans’ bus, and was patting myself on the back as I kept pace with this fast group. The wheels came off – or at least went up in the air – as I passed Edwin ever so slightly off-track, and spotted my photographer mates up ahead. Over-estimating my MTB capabilities, I thought I would show-boat for the cameras with my hands in the air. Big mistake – a massive wipe as my front wheel washed out on the loose gravel downhill, with me going down in a cloud of dust. The worst part of it was that neither Grant nor Anton managed to get a proper shot of what truly was an epic wipe. I got up and pretended to be fine, but felt as if I had just been blind-sided by Jonah Lomu.

Fortunately no serious damage had been done – a sprained thumb, bloodied elbow and interesting bruising on my right thigh – and a few Myprodols later on during the ride made sure there wasn’t too much discomfort. A great donga drop-off just on a km from camp provided fantastic entertainment, with some spectacular wipe-outs, and while I milked this vantage point for photos, a swarm of tiny little vampire flies came and sucked all the blood off me like weird cleaning bots from an space alien movie. What made the scene even more surrealistic was that the shallow pool a few hundred metres up-river from me crawled with crocodiles.

Around 4pm I headed back up the route to go in search of the backmarkers, and followed them into camp just as the sun began to set behind the fever trees gracing the incredible Kuduland Camp, our rest spot for the 2nd last night of TdT2012.