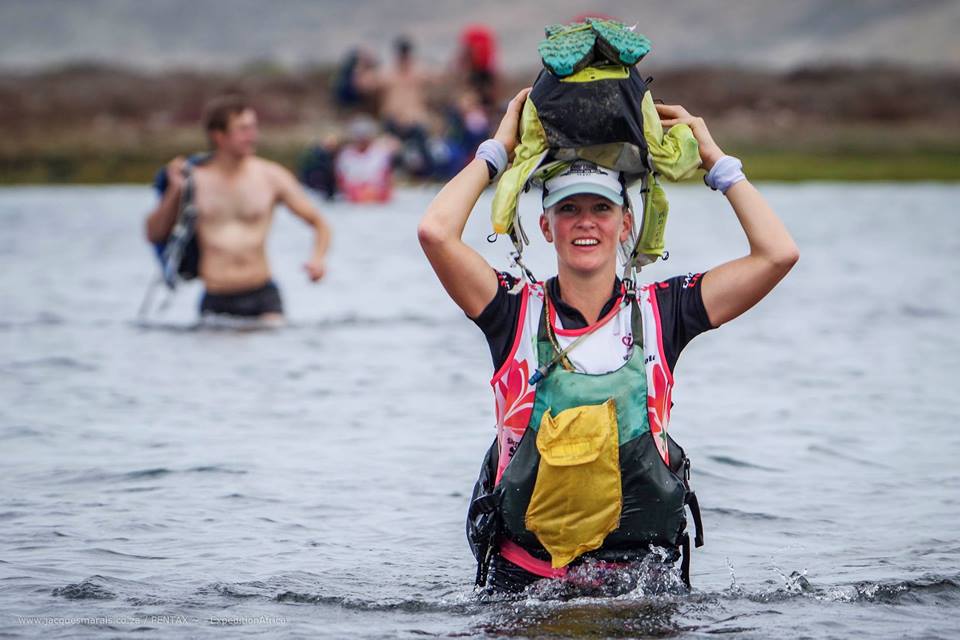 Or maybe I should rather say the ‘River to Ratelgat’ … The Kinetic Events Africa #EA2018 was always going to be a bit of an outdoor brawl, but nobody expected this gut-thumping blow to the guts so early on in this amazing race through the spectacular Namaqua West Coast region.

Yup, the competitors knew that a 50km paddle lurked with intent beyond the coasteering leg, which saw them ant-lining along the #DoringBay and #Strandfontein cliffs towards the tranquil hamlet of #Papendorp. What they did not know was that the SKy Gods had switched the head-wind fan on high, and that the paddle up the #OlifantsRiver had therefore clicked up a few notches.

My awesome foursome of friends from the venerable GRIT Nyamezela Adventure Racing Team kicked into gear early on, and it was fantastic to hook up with them at various points of the run and paddle. There was an obvious and easy cameraderie between Peter Van Kets, Kim van Kets, Misty Weyer and Dylan James Weyer, and it was pretty clear they were here to race AND have maximum fun.

The breathtaking 19km #Leg1 along the implausibly beautiful and dramatic coastal cliffs between #DoringBay and #Strandfontein was like something out of the Hebridean Islands, with the Atlantic Ocean in a tempestuous sulk.Team #GRITnyamezela came into #T1 at 12.30pm, ready to tackle the 50km paddle, meandering from Papendorp and past #Lutzville, with the #knersvlakte gnashing it’s teeth beyond the next transition.

A festive vibe awaited the field at the #lutzville bridge, with the local shiraz and pinotage flowing, and welcoming fires burning along the side of the Olifants River. The mood on the river was less mellow, with the teams battling into that hard core headwind strafing the kayaks all the way.

Team @gritgroup #GRITnyamezela got in just before midnight, and then set off from Transition #T2 onto a 45km through-the-night trek across the dark-zone spaces of the gritty #knersvlakte badlands. Few racers realised at this point that #ExpeditionAfrica had barely even started flexing its muscles here within the spectacular #NamaquaWestCoast#Matzikamma region. What was to come over the next 4-5x days promised to once again be a true test of mental, physical and spiritual character, with the #knersvlakte, #cederberg and #gifberg yet to come.