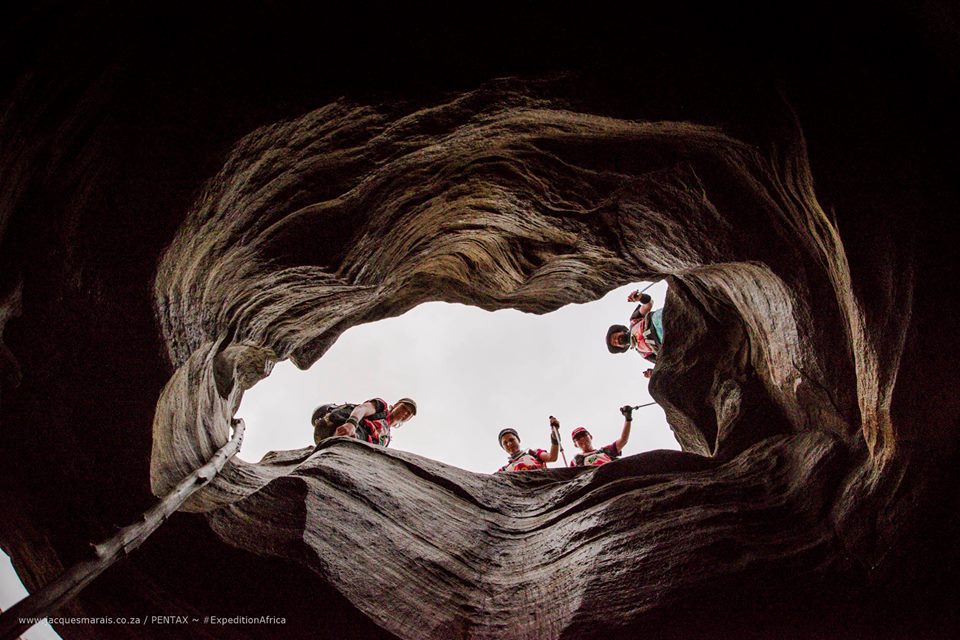 It’s been a long week since the ‘Big Babbelaas’, after the Namaqua Wines Party, following on from the Big Sleep, and post #EA2018 … I must confess, it somehow feels way longer, and while looking through the images in this final #ExpeditionAfrica post, there’s a compelling urge time-lining me back to that breathtaking route the racers took on through the Namaqua West Coast region. I am sure that holds even more true for Peter Van Kets, Kim van Kets, Misty Weyer and Dylan James Weyer of the GRIT Nyamezela Adventure Racing Team .

I got to know them as Ramkat, Doring, Sakkie and Spoedniek over six days of gruelling #expeditionracing, and have walked away with newfound respect for these four amazing characters. Together with Dudley Bruce Wessels, we got to share so many highs and (a few) lows, all leading up to that moment when #GRITnyamezela crossed the finish line in Van(tastict) Rhynsdorp.

To get to this elusive finish line from Jamaka Organic Farm – deep within the beautiful #Cederberg ranges – the foursome still had to face off against two challenging mountain bike legs and a hectic ‘Hike from Hell’. The first bike mission consisted of a gritty cascent out of #Algeria, finally culminating in a series of #neverender hills bunkering along the gravel roads leading to #Zandvlakte Private Game Reserve.

The Kinetic Events Africa Crew said all along the final trek through #KobeeCanyon would test the teams to their utter limits, and Stephan and Heidi Muller were certainly on point here. This remote and inaccessible tributary of the gnarly #doring River snakes through broken terrain and onto the approach to the imposing #gifberg massif. This turned into a killer trek, with some teams estimating up to 30hrs of bundu-bashing through near impenetrable spiky bush.

We saw huge #leopard tracks on most of the hike while trailing the team down the #brandewyns river. In addition, there were countless clawless otter, civet, African wild cat and aardvark spoor, too, and little wet patch in the sand where I had a moment with Donovan Sims

By now, the dreaded #sleepmonster were stalking both #DieOom as well as Team #GRITnyamezela, with the #GRIT boys and girls spending a solid 25hrs on the slog to the #abseil and their final transition. When I finally found them at the trail head out of the #Kobee, they were forcing their exhausted legs into a run, and not a second was wasted as they slugged it out to #gifberg.

I joined them on a scratchy bundu bash towards the prominent Spitskop peak, then missioned around to the abseil point with Africanyon, waiting on tenterhooks for them to arrive before the 6pm cut-off here. A few tense minutes followed, but the four heroes did not disappoint, and snuck in with just 12min to spare!

So cool to join them on the 100-plus abseil, with the amber sandstone cliffs bathed in gorgeous sunset light. I have a feeling this is a a moment none of them will ever forget. Nor will they forget the final night-time bike onto the finish line, and the utter exhilaration of crossing through the arch to complete this amazing race!