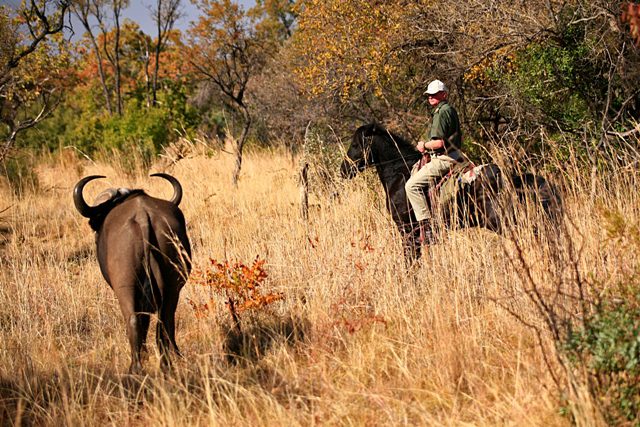 Dawn at Kwafubesi is an understated affair, with subtle pinks and tangerine tones sneaking in across the savanna plain. The tall silver cluster leaf trees morph into stark relief as the light intensifies, banishing the chilly bite of the bush morning at the same time.

Kwafubesi is the archetypal bush camp, with a central thatched boma area and five luxury tents dotted around in the surrounding bush the name means ‘place of the Eagle Owl’ but unfortunately we do not get to see the great night bird.

We do however get face time with Moby, the local porcupine with a penchant for the boma fireplace. He surreptitiously rustles in from underneath a spreading raasblaar bush, quills all a-bristle and snuffling like a congested piglet. He scores a potato or two from the kitchen staff, poses for a few photos and then bristles off into the darkness again.

The best way to get to get to Kwafubesi is on horseback and this is exactly what we did. We left the stables at Mabula at around 3 pm and trotted onto the network of game trails traversing the 12,000 ha property. It was still relatively hot for June and for the first part of the ride we encountered only the occasional antelope sheltering in the shade.

We locate the rhinos near to Main Dam, leisurely grazing along a knoll dense with tambuki grass. They pay us scant attention and at well over two tons I suppose it is no wonder. They’re amazing beasts, decidedly prehistoric in their shape and look and one cow has an especially vicious-looking horn.

We don’t go too close, despite the fact that white rhinos are generally regarded as being a relaxed and non-threatening animal. Unlike the black rhino, very few recorded cases of attacks on humans have been reported, but do not let this lull you into a false sense of security.

They’re massive beasts and their docile nature can switch from mild to wild in a flash, especially when they think their young are threatened or during rutting season. In fact, the horses at Kwafubesi have twice been gored by rhino and in one case one of the mares had to be put down after being pierced from buttock to stomach.

This did happen at night and not during an outride, but we’re nonetheless wary as we circle the group to get some photos. My horse seems a touch jittery and it is a mission to get the pics while wheeling her in a tight circle, but we eventually get a shot or twelve.

We stop off a little further to check out a huge croc basking in the afternoon sun. He’d killed a red hartebeest and what is left of the carcass rots on the water’s edge not to far away. The crocodile seems in the mood for fresh meat though and it keeps a beady eye locked on me and my horse as we canter past.

We do the sundowner thing next to a muddy dam, with a pod of hippos grunting a sonorous serenade from the reed beds. And then it is off to Kwafubesi, it’s resident porcupine and a solid 8 hour snooze under a feather duvet.

Today is not much different. We’re back on the horses, this time in search of buffaloes, but first we’re in for another face-off with the rhinos. There is a tiny calf with the family group though and we think it best not to hang around for too long.

The horses are frisky, constantly breaking into a trot or canter and there’s even a spurt of galloping along one of the open plains. It is incredible how close we get to animals on our steeds, and the bird sightings are especially rewarding. A martial eagle swoops from a dead tree metres away and a long-tailed bush shrike woops to catch a grasshopper taking off from our horses’ hooves. Grey Lourie (or go-away bird, if you prefer), arrow-marked babbler and wood hoopoe are everywhere.

It is also the flash of an oxpecker’s wing that alerts us to the buffalo herd. They’re resting in dense shade along a spreading plain and their ears prick up when they first notice our horses. We slowly walk our horses along the outer perimeter of the herd, keeping a sharp eye on the cows fanning out in order to shield their calves.

There’s no immediate danger, but we curtain the photo session without further ado when two cantankerous bulls sidle up to with 5 or 10 metres from us. Up close they look downright grumpy and there’s no way I would want to tangle with them.

One more bonus awaits us along our horseback safari. We’re within sight of the stables when a giant giraffe bull crosses our path. He’s undoubtedly one of the biggest giraffes I have ever seen and he absolutely dwarfs the horses and riders near him. For every one of his strides our horses need to do 3 or 4 paces and it puts us in perspective here in the great outdoors.

This time around we opt for the internal combustion engine to power us into our next adventure. Quad biking is certainly not the first thing that comes to mind when you think about eco-friendly outdoor trails, but a couple of hours on the MEAT may just change your mind.

For those in the know, the acronym stands for the Mabula Eco Adventure Trail, and it is one of the latest offerings on their outdoor action menu. The idea in itself is rather straightforward – you report to the Wildlife Centre where you meet your guide and are then transported to the waiting quad bikes near the air strip.

After a quick safety briefing and hands-on instructional session you power up and set off into the bush. The idea here is not to rip up the trail, but rather to idle at a sedate pace through the African bush. The four-wheelers, although powerful, are governed to a maximum speed of 20 km/hr, allowing you to traverse some of the reserve’s less traveled trails.

We’re in the pound seats as soon as we set off, with a herd of giraffe sky-scraping across our route before we can get the bikes into third gear. It is an unbelievable sight to see them this close and it is as if you are staring up at a horse on stilts as they arabesque past you.

We soon leave the gravel roads behind, grunting onto the narrow two-track trails where the quads are truly in their element. Moses, our ever enthusiastic guide, leads the way, pointing out ostrich, zebra, oryx and impala as we chug through the savanna grassland.

We take a breather near one of the watering holes and hike down to the water’s edge to check out the bird life. Moses also shows us seeds of the ‘name’ tree which the Tsonga people use to make bush coffee and points out a host of other interesting plants and birds as we wend our way back to camp.

Most of the remainder of the day is taken up by the transfer from Mabula to Hoyo-Hoyo Lodge, another of the Three Cities group. This Tsonga-styled and very exclusive bush lodge is situated centrally within the Kruger Park and is located in a 10,000 ha private concession area near its sister lodge, Imbali.

It takes a good seven hours to get there, but the trip is worth every second. I’m quite jaded by many of the so-called ‘premium’ properties out there, but Hoyo-Hoyo is special. The name means ‘you are welcome’ in Tsonga and the architecture borrows heavily from their traditional tribal style. The main boma entrance and individual suites all feature minaretted bee-hive roofs made from thatch, and the interiors are exquisite in their African simplicity.

After one of my best ever night drives – we see cheetah, elephant, civet, serval, spottet genet and African wild cat – we get back to the lodge where a lone elephant bull puts on a show at the water hole while we dine on stuffed quail starters and delectable lamb shank. Sometimes I really dig my job.

Today is the day of the long-awaited walking safari. Part of the three-day circuit between Hamilton’s Tented Camp, Hoyo-Hoyo and Imbali, we unfortunately only have enough time for the latter leg. Two armed guides will accompany me into the bush and we are to be joined by Evaart and Patricia, a Dutch couple I met last night.

As usual, we’re spoled with a sumptuous Continental breakfast before we set off. How these guys do it I have no idea, but the seem to have an inexhaustible supply of crisp-fresh salad, piquant cheeses and home-baked bread. The coffee’s good too and just the thing to kick your backside into bush mode.

We set off from Hoyo-Hoyo around 7h30, with the morning sun dodging in and out behind occasional cloud cover. Both Denzil and Greg are carrying .458 calibre rifles, big enough to knock even a charging bull elephant back on his haunches, so I figure we’ll be safe enough.

The thing is, you never know in the bush. Initially you’re on tenterhooks as you tiptoe through the tall grass, with thickets of russet bush willow, buffalo thorn and jackal berry rustling all round. All your senses are on high alert, and your eyes and ears scan the impenetrable wall of vegetation for clues to any impending danger.

This generally does not come and slowly but surely you relax, soaking up the sights, sounds and smells surrounding you. The ‘go-away’ call of the grey loerie, the whoo-whoo whistle of the olive bush shrike, the dainty tracks of civet or genet dabbed along the sandy plains; you become aware of the signs of the wild, and soon find yourself assimilated into a jungle diametrically opposed to today’s more regular urban one.

And just when you think you have this wilderness thing waxed, an elephant suddenly trumpets and the dense bush to your right starts crackling and breaking and snapping. And you kak yourself, suddenly realising with deadly certainty that you are way down on the food chain when you’re on foot in Big 5 territory.

We change direction, giving the elephants a wide berth and heading to the river bed. There are rhino tracks and middens everywhere and dead leadwood trunks are rubbed smooth as marble by them and the elephants. A banded mongoose scurries away in the undergrowth and a grey duiker bounds away in a monochrome, fast-forward blur. For a while a tawny eagle circles above us against the obsidian glare of the sun, unblinking eyes tracking our clumsy progress through knob-thorn and wait-a-bit thickets.

A few days earlier, on one of the walks lead by another guide, the group was charged by both a leopard and lioness. We’re less lucky (or should I say unlucky) and make it back to the glorious comforts of Imbali unscathed. And now for the toughest part of the day : do I chill on the deck and indulge in high tea, get ready for my afternoon game drive or head back to my chalet for a soak in the outdoor jacuzzi with its view over the water hole?

Went for my final game drive with Denzil last night and it turned out to be a laid-back affaire. We bumped into a big-maned lion just before twilight and then cruised the backwater gravel roads in vain after that. You can’t have it all every night though, so it is not with a heavy heart that we head back to the lodge.

This morning is all about getting back into the urban gear. Not that I am in the mood for Johannesburg, but I’ve got to pass that way to get back to Cathy and the kids and I cannot wait for that. So it is a bit sad to slip from Imbali’s sumptuous embrace, but the I also know that I’ll make my way back here the first chance I get.