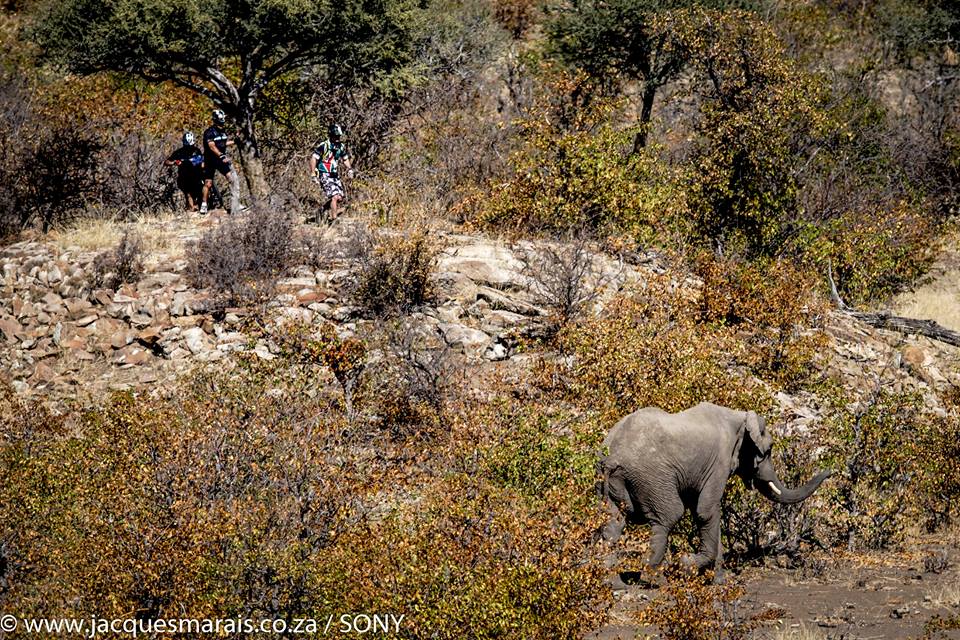 This year, #SAFAIR did not lose my bike on the way to the annual #TourDeTuli MTB Ride in the #Tuli Block. Hallelujah! This obviously was a huge relief and an awesome start to one of my favourite annual mountain biking adventures, and proved to be a sign of excellent things to come.

I was fortunate enough to fly up a day early, and this meant we had an extra day to scout the route. The whole wilderness wise-guy crew was there – Andrew Howard, Grant Roddan,Frank Bekkens, the mad Woods brothers, and of course my riding buddy from last year, Trent Sinclair. I was pretty lucky to have missed what sounded like the tequila party of the decade the night before, but this did not seem to diminish the constant level of kak-causing one single iota. Fortunately Nicola Harris,Sue Snyman, Janet Wilkinson, Malora Zeller and the girls kept things together – kudos to them.

Our recce ride proved to be an absolute cracker. The plan was to find an elephant, get as close as safely possible for an image, while checking out photographic options for the following few days. Ellies prove pretty difficult to spot here in the crouton and mopane forests of the breath-taking #MashatuGame Reserve, but the arid savannah literally teemed with other game.

After bomb-shelling through an impala herd, we spotted a lone bull elephant an hour or so into the ride. I cycled around the ridge to get onto high ground, and then hiked into the rocky outcrops in the hope of shooting the ellie from above, with the riders passing in the background.

The #MTB Gods delivered: Trent and two other riders cranked around into the next valley, ascending a small ridge to use as a vantage point. They literally came eye to eye with the bull as they crested, and I got some great shots as the giant pachyderm extended its trunk towards the riders while lazily flapping his ears.

On my hike back down I flushed two spotted hyenas; I have to admit I’m not sure who crapped themselves the most. I got a blurry shot of the large female loping into the thorny scrub, and then hot-footed it down to where the rest of the guys waited in the shade of a spreading shepherds tree.

The ride back to the Limpopo Valley Airfield camp was pretty laid-back, and that night I managed to dodge most of the tequila handed out by Jubby, and lay in my tent listening to the black-backed jackal howling at the billion stars above. Here are some images from the 24hrs before the start of the epic 300km #NedbankTdT, following the elephant trails through Botswana, Zimbabwe and South Africa’s Limpopo Province.