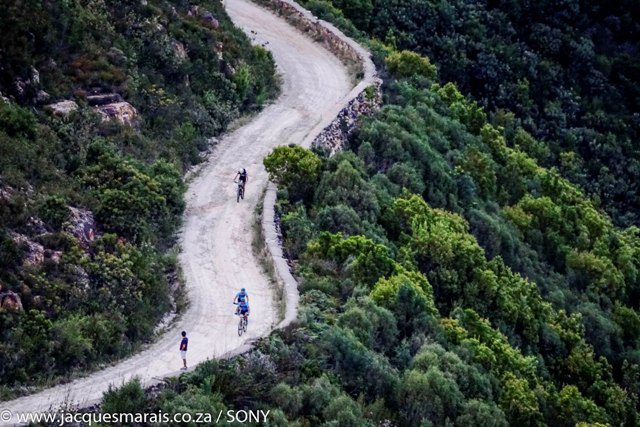 Bliksem. Gamkaberg is one ma-se-grannygear of a crank. First you have the long unduling up-and-up from WaterPoint #2. Then, all of a sudden, you bugger off into the klipkak ridges to the right of the district road, and it is about now that you realise that the shizz is going to hit the small-blade.

It’s steep, but that’s not really the issue. the issue is the never-ending field of ball-bearing sized pebbles adding 300% effort to riding this absolute bastard of a climb. It is the type of climb that will make strong men weep behind their Evil-Eye sunglasses, and turn god-fearing souls into mo-fo swearing bike chuckers.

I mean, I even saw Esther Suss grit her teeth once or twice, while Sharon Laws gave me a death stare when I said there is another 2kays or so of the climb left. And take it from me, these two tough-as-nails chickas would kick the ass of a klipspringer on amphetamines any time of the day.

It is no wonder that Esther is currently ruling the proverbial roost here at #TransCape2016. She once again dominated#Stage2 today, slugging it out with (mostly) the boys in the front bunch. GOing through the photos, I see bucketloads of pain going down at the sharp end of the race, but basically Suss is just sitting there, sussing out her next move.

The 13km climb into Gamkaberg Nature Reserve is pretty relentless, but it was in this godforsaken terrain that the Swiss World Champ started dominating. Nobody could hang on as she hit the home straight, taking two out of two stage wins.

Huge kudos to all the riders, even the ones still out there in the field while I’m typing this. I rode less than half what you guys did, and I needed about half a dozen WIndhoek Lagers to re-hydrate. You are ALL mountain biking gods!