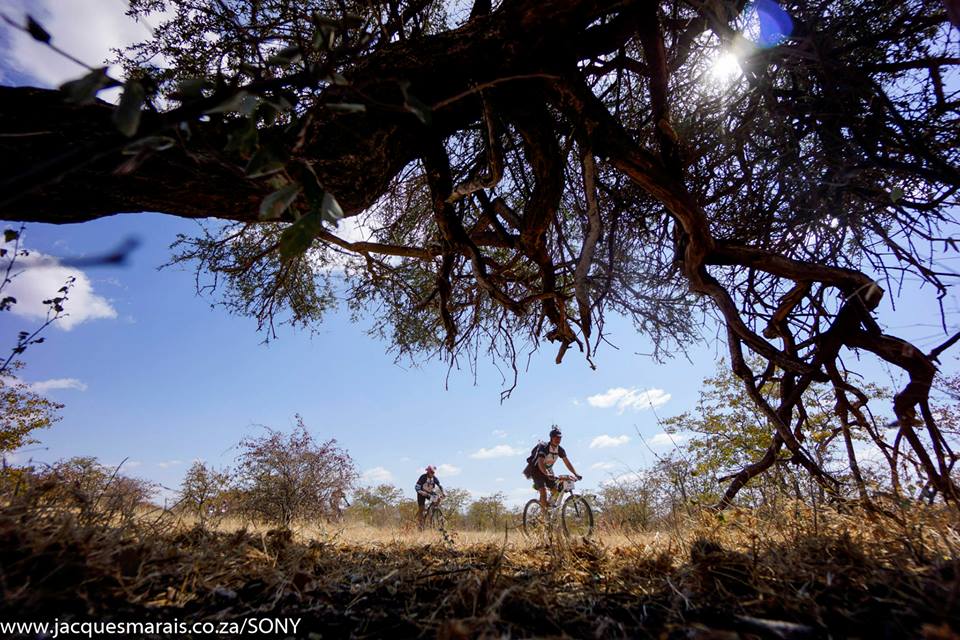 Everybody comes short on the NEDBANK Tour de Tuli at some stage; it is just the nature of riding wild on ungroomed and challenging tracks. I had a few tumbles, fortunately innocuously enough, but sometimes you fall at just the wrong time or place.

Today it was the turn of Tony Roche, my guide, as we missioned through a dense stretch of mopane. A branch caught his handlebars and he came down hard onto a spike of ancient leadwood, right onto the side of his calf.

It was not a pretty picture, and it basically looked as if someone had used a blunt axe to split his leg about 2cm deep, mashing the skin into the wound. The Rochenator might have been down but he was certainly not out; a quick patch job later and he was up and riding again. (The bush doctor later had a fun time stapling the gash up, with 13 stitches in a jagged line).

Highlights of the day (and there were stacks once again): the school back-pack handover, where the riders gifted school rucksacks from WILDERNESS SAFARIS to a host of primary school pupils; a stop-over at the local shebeen to partake in an early morning No. 17 (yup, they still brew LION Lager in Zim); and flowing, fast trails all the way to Fly Camp.

As usual, there was a final 2km of testing sand that saw riders really take the puch as the heat and terrain sucked the last smidgen of energy from their psyches. But determination and cameraderie (there is no shortage of the latter at #TdT) saw them home in the end.

And what a home for the night; Sentinel Limpopo Eco Safaris is an incredible place, with a rocky view point across a natural amphitheatre where more than 40 elephant came to feed as the sun set upon the African plains. It is a truly magical place, and must rate as one of the most spectacular settings for a wilderness camp on the whole of the continent.

More information and images are available at www.childreninthewilderness.com