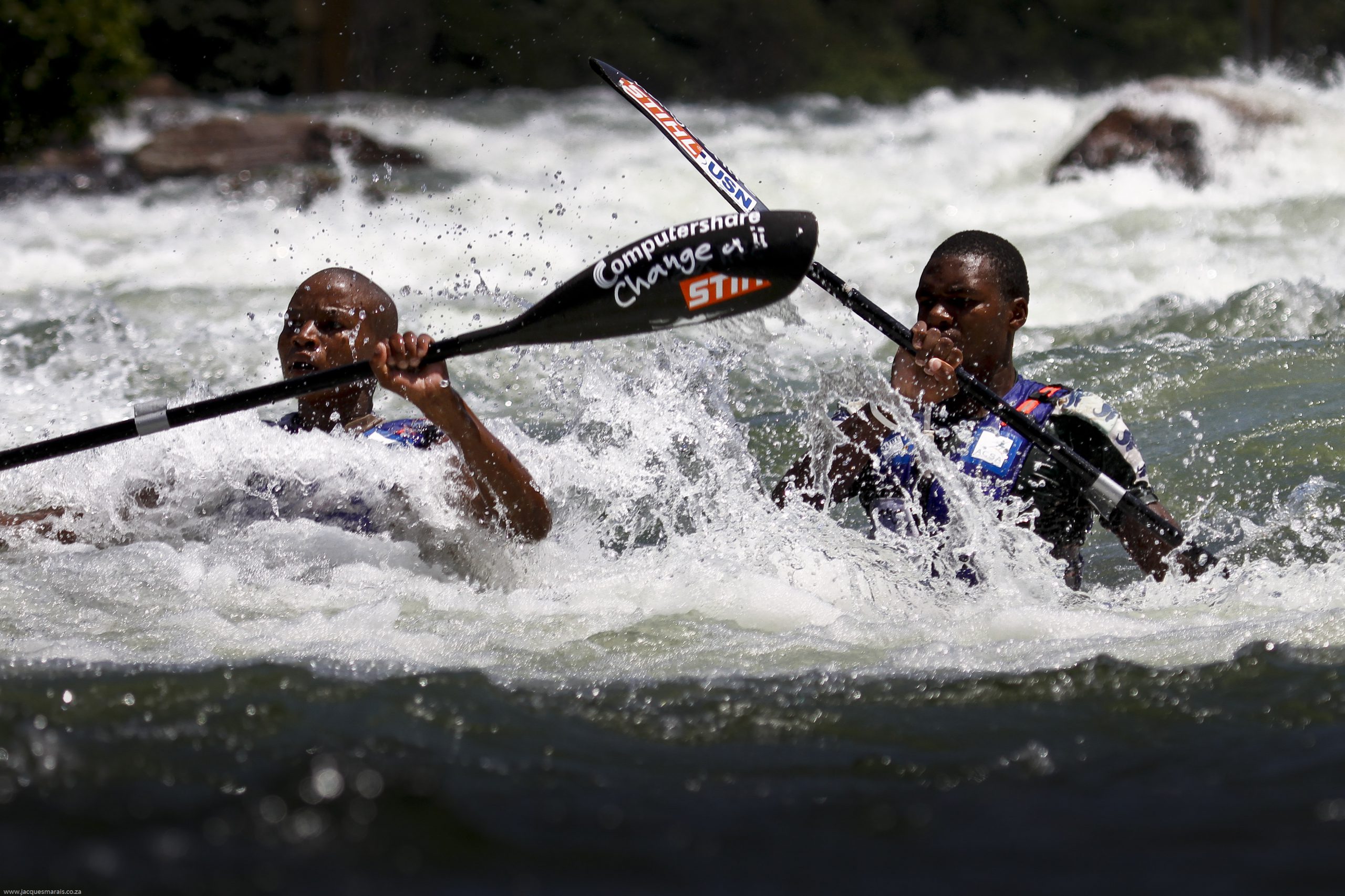 This year’s Nonstop Dusi will forever be remembered as the event where Martin Dreyer’s Change A Life Development Squad took their lifelong dream and turned it into reality. His young charges made paddling history when they claimed line honours in the gruelling race, thus becoming the first black canoeists ever to win a major paddling event.

The Nonstop Dusi is no ordinary event. This no-holds-barred canoe marathon condenses three days of extreme Dusi mayhem into one, and one should therefore expect the athletes lining up at the start to be extraordinary men and women. As indeed they were, and none more so than the six Change A Life athletes from the Martin Dreyer Academy.

Flying the flag not only for title sponsors COMPUTERSHARE, but also for hundreds of friends, family members and supporters here in the Valley of A Thousand Hills, the young development paddlers knew this would be their biggest test to date. Ahead of them lay 120km of churning rapids and back-breaking portaging, set within a cauldron where temperatures on the actual day soared well above 40 degrees Celsius.

Canoeing enthusiasts from around the world had been taking a keen interest in the Change A Life story, especially following on from their incredible performance earlier this year at the Hansa Powerade Dusi Canoe Marathon itself. Here Thomas Ngidi and Eric Zondi wrestled their way to an unprecedented third position, the first podium place for black canoeists ever in an internationally acclaimed race.

Martin Dreyer, himself a seven-time Dusi and Non Stop Dusi winner, probably understood better than anyone else what his young heroes were about to face. “This is no ordinary river, and most certainly not an ordinary race”, he said as he helped prepare their boats in the pre-dawn light upon the banks of the Dusi River in Pietermaritzburg.

“Eight hours of insane racing awaits these young warriors. They must battle this treacherous river and, for nearly a quarter of the race, carry their boats along energy-sapping tracks as they do battle with both the terrain and the searing heat”, he continued. “Should they win that war, they will still have to contend with fierce competition from a select field, including defending champions Michael Mbanjwa and Piers Cruikshanks”.

The Change A Life race crew consisted of 2 K2s manned by Zondi and Ngidi and burgeoning understudies Kwanda Mhlope and Richard Cele, as well as two K1 canoes, with Lucas Mthalane and Nhlanhla Cele gunning for solo glory. Each of these young paddlers lined up for the Stihl Nonstop Dusi shouldering huge expectation, and they were certainly not about to disappoint.

Right from the start gun, no quarter was asked for or given, and Zondi and Ngidi made their presence felt immediately. With the cheering of Valley residents resounding in their ears and unflinching support from their Change A Life seconding team, they surged ahead of once untouchables like Mbanjwa, Cruikshanks and the Carter-Brown brothers.

It took Eric and Thomas an excruciating 8hr17min to rewrite the record books, and when they finally scorched over the finish at Blue Lagoon in Durban, they had dominated the race in its entirety, beating the second placed Kelvin Trautman and Craig Turton by more a comfortable nine minutes. “This is my best feeling ever”, smiled a jubilant Zondi at the finish, while an overjoyed Ngidi raved that he felt “less tired now than at the start of the race”.

The good news for the Change A Life Squad continued ‘non-stop’ when Mhlope and Cele’s K2 bladed in for a well-deserved third place after an epic race. Both the solo paddlers performed way beyond expectation as well, with Lucas Nthalane missing out on a first place by a mere three minutes after an unfortunate swim. ‘Silent Assassin’ Nhlanhla Cele blistered into third position to claim an unprecedented four podium positions for Martin Dreyer and his charges.

“Now that’s what I call a good day the office”, exclaimed an exuberant Dreyer after seeing his development squad home. “The only problem is: what next … But I suppose we have the Drak Challenge looming, plus the Msinsi Multisport Series, so there is more work to be done”. But right now, I do not think any on person in the world of paddling will begrudge Dreyer and his team a few days of well-deserved rest and recuperation.

“The only problem is: what next … But I suppose we have the Drak Challenge looming,”