Red Bull Illume (or the life of a Rock Star) 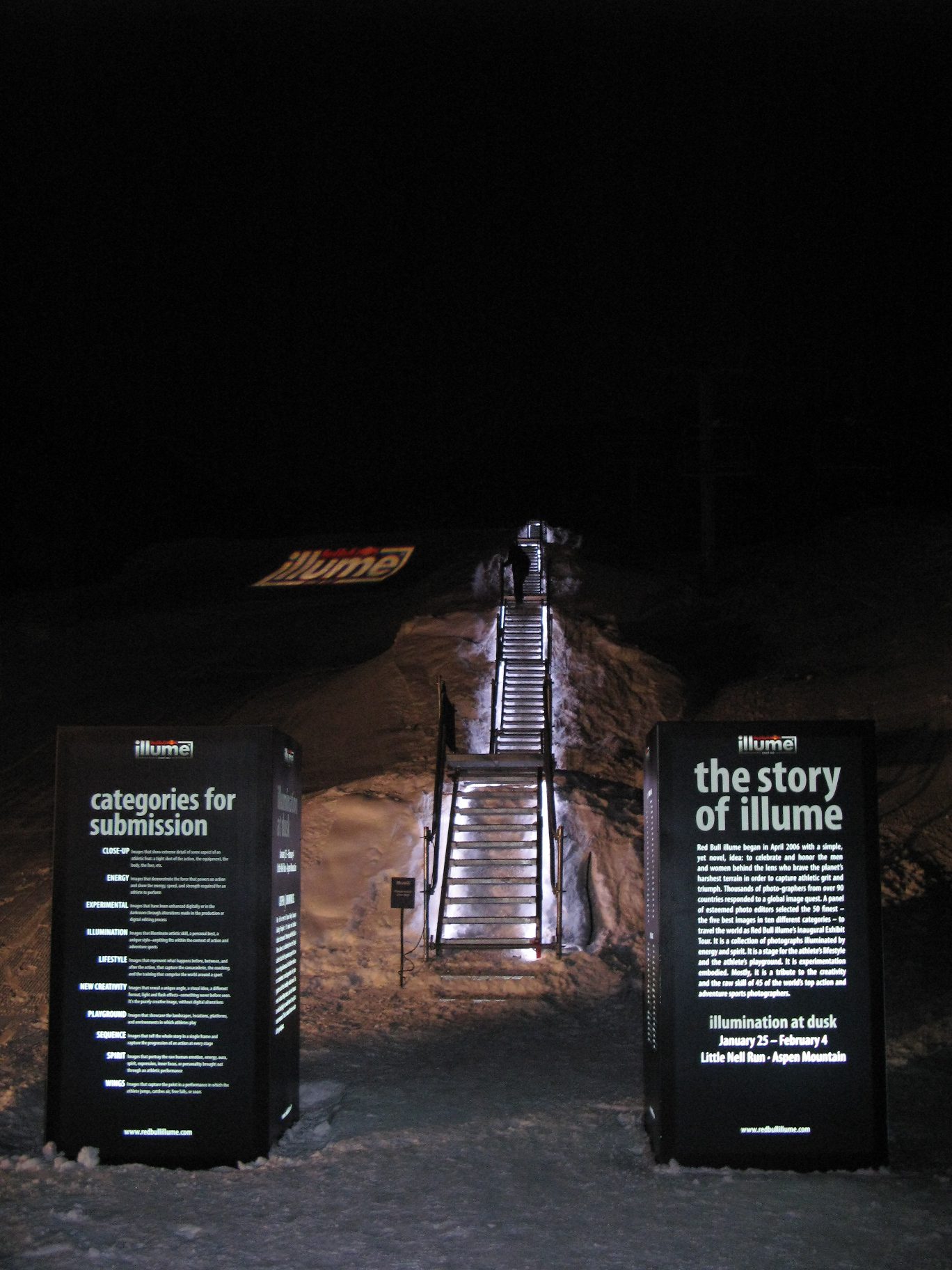 And so the mission begins. The background : I’ve been chosen as a finalist in Red Bull Illume, a premier international extreme sports photo competition. Out of more than 10,000 entries from a whole bunch of shit-hot photographers, I am one of the final 50 standing.

This is pissing with the big dogs. I mean, I am one of only 4 shooters from the southern hemisphere to make it into the finals. And the best part of the deal is that Red Bull is flying us all into Aspen, Colorado, for the final judging and awards.

For three days we’re gonna live it up in 5-star hotels. We’re going to snowboard and fly-fish and ice climb and we’re going to hang out with the rich and famous in one of the world’s finest ski resorts. Let’s just say that this is the closest I will ever come to being a rock star …

I’ve no pretensions whatsoever of winning the Illume competition, so for a change there is minimal pressure. No clients, no schmoozing, no deadlines, just three full days of plugging into some damn fine winter adventures.

From Aspen the plan is to fly up to Denver and connect with my long-time buddy Mike ‘Mielie’ Brislin. He’s been living in the States for a good 5 years and has a selection of mountain bikes to drool over, so he’s a good man to know.

We’ll let the weather lead us once I meet up with Mielie, but the plan is to ride like demons. (Well, middle-aged demons, I must confess, with a good few beers thrown in for good measure.)
Moab, Slickrock, Poison Spider, Zion and Canyonlands National Park. The White Rim trail … if the blizzards let up, this is where we’ll head. Otherwise we might do a MTB migration to the south and check out New Mexico. Right now, it is wide open and I can’t wait.

Why do they always wake you at fucking 4 am on an intercontinental flight? I mean, it’s not as if missing a crappy breakfast is going to look shit on your CV, is it? Worst is, you always end up eating it and then have the rubbery pork banger repeat on you as you make your way to customs and immigration.

At least the plane was relatively empty, so I had a free seat next to me and got a few hours of shuteye. Also watched “the Departed” – a totally kick-ass movie, so not too shabby as far as economy class travel goes. Three hours to kill at Heathrow, then connecting to Chicago and onwards to Aspen.

Most of the flight is above the steel-grey Atlantic, and generally with a thick bank of cloud obscuring any views of the landscape shifting by below our United Air flight. Once or twice there is a break through and as we pass over Montreal, the countryside is all aglitter with frozen lakes and shimmering rivers. Chicago is covered with snow as we bank in sharply over the ocean to land. Suburban houses shuck up through the powder drifts, with bare trees silhouetted in monochrome along city parks and golf courses.

Some observations of my first contact with Yankee-kind. Much of the frontline contact is with Immigrant Americans, with WASPS no doubt ensconced within their comfortably numb cocoons.

I get through Immigration smoothly, quizzed by a burly Ukrainian dude with a mustache the size of a roughed-up ferret, and an attitude bordering on “Go ahead, make my day”. So it is a good thing that I did not answer positively to the question whether I was visiting the USA with a view to performing terrorist activities or destabilize the present government.

The hairstyles on some of the girls are way off the silly scale; one Afro-American girl has her hair wound in a tight golden bun around her skull, with gelled slivers sticking out on top in a coiffure resembling a koeksuster with wood shavings stuck to it.

With the exception of the odd sartorial success story, the fashion sense hangs somewhere between Mr Price and fabulously flabby in loose tracksuits. Could be Klerksdorp on an overcast day, except for the wall-to-wall fast food outlets shoveling out super-sized helpings of fries in the background.

Then there is the guy in the full camosuit, including stalker boots and cap, padding through the departure hall in search of some imaginary prey. All in all, this is fertile territory for anyone keen to follow in the footsteps of Bill Bryson.

The chickens come home to roost on the flight to Aspen and I spot a few of the Red Bull shooters. I sit next to the photo editor of Sport, one of the more respected German language publications. So it is good networking if nothing else, that’s for sure.

This is probably the closest I will ever get to living the rock star life. Hotel Jerome smells of money and my room comes complete with a Jacuzzi, a lounge with a fire place and a bed the size of a small European country. If ever I longed to be 26 and single, this has to be it.

There are no groupies for me though, so I hang with a few of the photographers I met on the plane. The beers and good and the jet lag kicks in quickly, so by the time I hit the bed it is with a complete and utter vengeance.

The morning kicks in with all-American perfection. Powder-blue sky dome up above, snow fluffed Christmas trees lining the streets. It’s a bit like Greyton but just a lot cooler (in all senses of the word).

I hook up with James from Sweden, Daniel from Austria and 2 of the German shooters, deciding to slowly slip into the American way. Aspen is super expensive, but we manage to ferret out Annie’s eating House, an establishment as close to a local joint as one could find in a place like this.

Burgers, beers, coffee, a brownie … just enough fuel to charge up the body for a hike onto Little Nell slope where the exhibition is in the process of being set up. The scale of it is brain-boggling, with 25 double-sided black cubes erected on five separate levels.

Two photos are back-lit within each of these 2m x 3m cubes, with generators supplying power to light up the slope to transform it into a hi-tech fairyland wall to wall with adrenaline.

I decide to sneak in an earlyish night and also catch up on my journal and photographs. This is boring, I admit, but I’m trying to arrange an ice climbing trip in the morning. It’s going to be $400 but it should be worth every cent if it comes off …

Body clock still running a way off time zone, so woke up around 5 am and could not get back to sleep. Only one thing for it; get up and go explore the mountains.

I’m well up onto the higher slopes below Red Mountain by the time the sun eventually rises, so I decide to take a break at one of the viewpoints overlooking Aspen slumbering far below. Once you stop it is freezing though and I move on after snacking on a Cliff Bar.

Even though the slopes are densely forested, Wildlife Services signs caution against avalanches. This is new territory for me, so I decide to rather retrace my steps after two and a half hours of solid snow trekking. By 11 am I’m back in Aspen, celebrating a good session of morning activity with a burrito breakfast and a tall skinny (latté, not blonde).

The rest of the afternoon is spent on the ski slopes shooting some powder action. It’s been a great snow year and I’m cursing my pathetic athletic ability on the slopes. But this is all about to change when I meet up with Mike tomorrow, as he has made it his mission to bet me up and riding before the week is out.

As the sun sets, we get into our real reason for being in Aspen. It is time to head up onto the Little Nell ski run for the illumination of the 50 red Bull Illume images. Each of the photos have been printed nearly 2 metres across and will be backlit by serious light.

It looks super-cool with an ice stage, Red Bull girls in ice maiden outfits, glittering candles placed strategically in the snow and, of course, our fifty images, super-sized for maximum effect, bearing across the slope.

First prize (and $30,000, the bastard!) goes to Fred Montagne from France. He bags this honour with an arty monochrome shot of a skateboarder doing a kick off a concrete wall. Great image, but not really what I would class as a great extreme sport photo. In my mind, Ricky Wilson or Brian Bielmann should have taken it, but hat’s off to Fred.