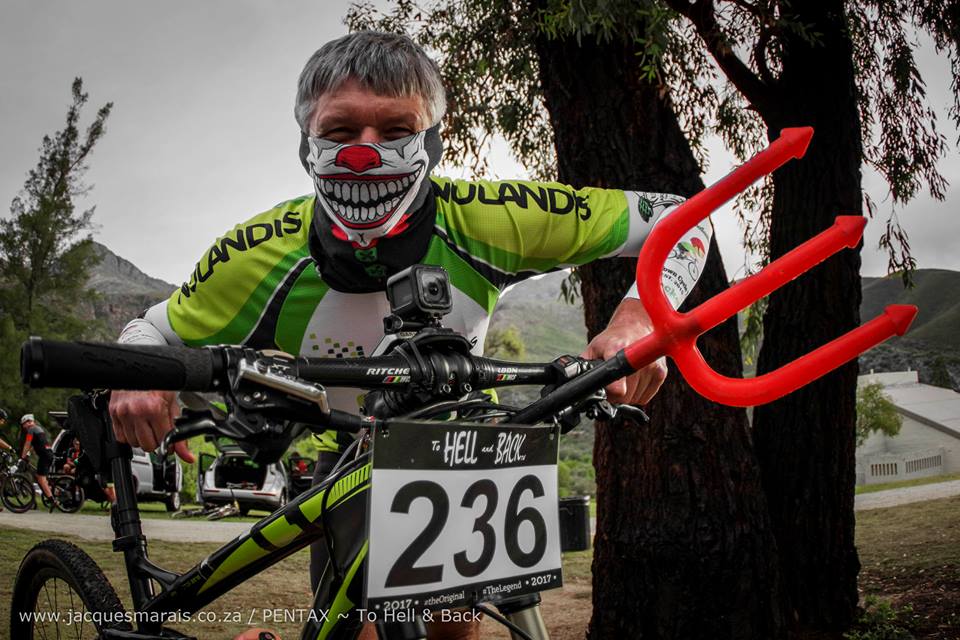 If you’ve been to HELL & BACK – that iconic and long-running 2-day MTB Stage Race presented by EcoBound Mountain Events – you’ll know exactly what I’m talking about … it’s no wonder all the old hands refer to it as #TheOriginal.

This is all about gritty and old-skool cranking, with a unique and down-home honesty, stemming from it’s family-run roots and values. Yup, TO HELL & BACK is one of the few events that does not fall into the trap of only caterign for that 10% Elite Rider bracket.

Instead, it is all about the weekend warriors, the quiet guys on their dusty 26Rs, plenty okes with boeps, and no-nonsense Plattelanders who come here not to show off their R180k bike, but instead to praat kak, drink a few dops, and klap that dirt road into Gamkaskloof, hard.

Plus, there’s just enough of a sprinkling of hipsters, hooligans and hotties to make this mix dynamic, and never boring. ANd if you want characters – this has got to be the best event ever.

“This is our annual MTB year-end function”, jokes Jakkals Jacques Herselman and his good mate Sitbok Kevin Eltigre Taljaard. This year, they set up a private wine bar in Eugene Roux‘s Bike Mechanics Tent … well, if I’m honest, it was more a circle of plastic chairs, shared glasses and a constant supply of bottles which magically appeared whenever a glass seemed empty.

The other quote I heard from Zane Schmahl was that this is a ‘tour with medals”. And damn good T-shirts, I might add. In the end, it is all about a real-life MTB Adventure, without gimmicks or bells or whistles. “For real mountain bikers, you know” … That’s the typical comment you get from #HellAndBackers once they bang into the under-belly of Gamkaskloof.

They’re usually saying this with a big-ass #DarlingBrew beer clutched in their paws, and with dust and sweat smeared across their smiling faces. Sometimes they’re too moeg or dors to say anything much, and just stand there, slightly dazed, but you’ll get the same shpiel from them once they’ve dipped into the inflatable pool, or hauled their asses into the shaded bar area.

Bottom line, the EcoBound Mountain Events #ToHellAndBack will always be one of those old-skool classics. No wonder it boasts the distinction of being SA’s first ever MTB Stage Race, notching up its 22nd running last week. What riders can expect is two days of bike adventuring into the remote Gamkaskloof (and of course an op-skop of note)!.

But then, what else would you expect from an event that has become widely known as the ‘Unofficial #MOVEMBER World MTB Champs’ 🙂 Starting from De Hoek Resort near Oudtshoorn, competitors face one moer-of-a-trap into Gamkaskloof. This valley is colloquially known as Die Hel, for a number of reasons: heat and extreme temperatures, for sure, but also for the dangerously steep gravel strip you need to navigate into this back-of-beyond valley.

Even today, you can get there only via a dead-end pass with vertiginous drop-offs and erosion ruts of legendary proportions. The historic switchback – constructed by none other than master road builder, Thomas Bain – winds through the rugged and inhospitable Swartberg ranges, and it takes guts to get in there on a bike.

Once you’ve survived those deep and dark moments that comes with suffering up the never-ending Heartbreak Hill, or have jettisoned into the very heart of Die Hel, ‘The Warm Place’ turns out to be a rugged little corner of natural heaven … without the flashy brashness of most of your contemporary MTB events, of course.

A rudimentary tent village, crackling braai fires, loads of #DarlingBrew craft beer, red wine and the classy delicacies of ‘Hell’s Kitchen’ … dancing with the devil does not seem to be such a bad gig. Until you realise there’s a shiteload of ‘up’, and it lurks just a few metres beyond the startline in the form of Elands Pass.

It takes serious guts to crank these 26 switchbacks on morning-after legs, but you have no choice, bru. Ask me: I’ve done it on a few occasions, and there’s bound to be some serious suffering involved in the calf department.

Beyond Elands it gets easier, but not by much, until you eventually bleed onto Die Top. Wrestle your way through high winds, dense fog and wintry temperatures, and you will be home and dry as you zigg the more than 20km of downhill back down to De Hoek.

There will always be blood, sweat and tears, but with it comes huge dollops of satisfaction, and war stories which are sure to last you for a life-time. These are some of my images from Day 1, and I will be loading lots more during the rest of the week – enjoy, and shot for the laughs, guys.

I once again shot on my kickass PENTAX SOUTH AFRICADSLR system, and I put the #K1, #K3 and #K70 to the test in non-stop dust, rocky river crossings with lashings of spray, hectic roads and constantly changing light … the cameras did not falter even once. Over the past couple of years, the #Pentax system has proved to be unbreakable. Shot Brett Skolmen – I am one happy shooter!