Ride4Lions Day 1 – Where Wild Things Are 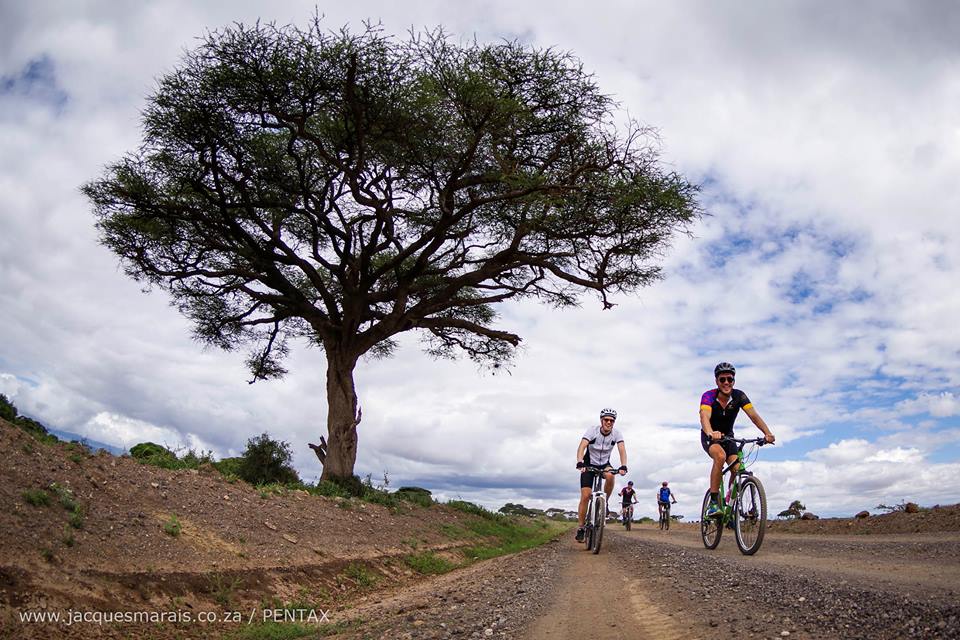 Amboseli National Park has been on my radar ever since my days of traveling vicariously via the pages of dozens of National Geographic magazines I devoured in our local library in Grahamstown. I clearly remember Wednesday afternoons when we had 3hrs of freedom to wander into town, and the musty, welcoming smell of books once you entered the vaunted old sandstone building.

Here you could escape the militarist boarding school rules, and time travel to anywhere in Africa, or the world. Once I had selected my full complement of Willard Price (or whoever the flavour of that particular month would be), I’d drag out the remaining hour or so mentally teleporting through that iconic yellow rectangle on the cover of #NatGeo.

Doing #Amboseli on a mountain bike during #Ride4Lions was even better than those dreamer days of yore, and to say this ticked one of my Top 3 adventure travel boxes would be a vast understatement. Day 1 kicked off with a short charter flight from the sumptuous Great Plains Conservation #OlDonyoLodge and, as in many tall tales told of African adventures, started with us having to buzz the runway in the park to get rid of elephants on the landing strip.

A #GreatPlains and #Kenya Tourism welcoming committee briefed us on the various safety aspects, and half an hour later, the first ever group of #R4L riders set off on a pioneering ride via one of the world’s most diverse ecosystems. The wetland system here in Amboseli are fed by glacial run-off from the #Kilimanjaro ice cap, and this creates a unique and water-rich environment that draws wildlife from the surrounding, arid plains.

Within a few kilometres, our route banged us straight into a Bermuda Triangle of buffalo, elephant and hippo, with chief guide Jackson Lemunge using the game vehicle as a shield to keep us from the unwelcome attention of a rather grumpy dagga-boy, fortunately gallumping through a hip-deep swamp. Forever views across verdant grasslands – with occasional glimpses of the Kili summit through swirling cumulonimbus clouds – spurred the riders on as we pedalled towards the national park exit.

After a couple of hours on the bike we transferred to our lunch spot close to the border with Tanzania, and got to tuck into what is without a doubt the most sublime meal I’ve ever had in the bush (and possibly out of it). Tired riders sprawled on bean bags, forcing down a final dark chocolate eclair, before saddling up for the penultimate push to our tented camp in Kimani Sanctuary, approximately 30km away.

The gravel roads inside the national park gave way to a mix of trippy jeep tracks and game trails, making for a fast blast with just enough of a technical edge to keep you focussed. At one stage, I was surrounded by a herd of #masai giraffe galloping full tilt next to us as we approached one of the corridor sections that allow game to move freely in this region of #Kenya.

These corridors are also part of the focus of the #GreatPlainsFoundation, and the ride aims to generate funds to not only conserve – but also expand – the habitat for wildlife traveling between the national parks, conservancies and private reserves. Electrified fencing assists in keeping elephants out of the villages and fields, and in turn offer safe passage for both the animals and local population.

Our camp for the evening was set up next to a small stream, with giant fever-tree acacias towering over the luxurious tents. Riders had access to massage therapists, a chill area with an endless supply of ice-cold Tusker and White Cap lager, and a brilliant bucket-shower system set up in their own private en suite bathroom.

Imagine the film ‘Out of Africa’, but with the added adventure element of mountain bikes, and you may get an inkling of just how incredible an experience this all was. As a bonus, Jackson grabbed me just before sunset and we rumbled off in the Land Cruiser to see Tim, currently the 3rd biggest living tusker in the world.

This gargantuan pachyderm and his merry band of young askaris had wandered into Kimani, and what a privilege it was to look him in the eye, and pay homage to what is unarguably one of the most magnificent beasts on our tiny blue planet. Fireside tales, cold beers, exceptional food, billions of stars … a night in #Africa does not come better than this.